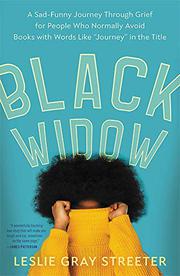 A Sad-Funny Journey Through Grief for People Who Normally Avoid Books With Words Like "Journey" in the Title
by Leslie Gray Streeter
BUY NOW FROM
AMAZON
BARNES & NOBLE
LOCAL BOOKSELLER
GET WEEKLY BOOK RECOMMENDATIONS:

A memoir about how the author coped with her husband’s sudden death.

In her seriocomic debut, Palm Beach Post entertainment columnist Streeter pays tribute to her husband, Scott, by sharing detailed stories about their life together and her many struggles dealing with his death. Because Scott was white and Jewish and the author is black and Baptist, religion, racism, integration, and acceptance are significant topics throughout the narrative. For the first few months after his death, Streeter was overcome by grief as she had to pick Scott’s coffin (a “lovely, Jewish-law-compliant pine box”), choose the appropriate spot to bury him and which dress to wear to the funeral, and, most importantly, figure out how to tell their son, almost-2-year-old Brooks, whose adoption was nearly complete, that “Daddy’s not actually working late.” The author also shares her insecurities about weight and overeating, the intense exercise program she endured to get back in shape after binging, how she drank to avoid the pain, and the necessity of relying on her mother, who had also recently lost her husband. Although Streeter’s humor occasionally feels forced, her grief, lucidly portrayed, is tangible, and it’s clear writing about her difficult experiences proved cathartic to her and to those who know her and Scott and their relationship. The most moving part of the book, divided into chapters such as “Grief Cake,” “Healing: It’s Like Putting Eyeliner on a Baby,” and “You’re Gonna Make it After All,” concerns the author’s continued hopes and fears regarding the final adoption of their son, a narrative thread that culminates in a heartwarming verdict by the judge. Her resilience in the face of devastating loss is commendable, and while the book isn’t a top-shelf memoir about grief, Streeter’s candid exploration will resonate with those who have dealt with similar circumstances.

A love-filled eulogy to a beloved husband and the special times the couple shared before he died.