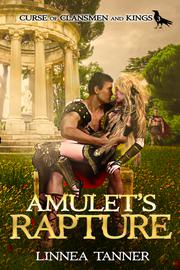 This third installment of a historical fiction series focuses on the tribulations of a Celtic princess and a Roman soldier.

Tanner’s (Dagger’s Destiny, 2018, etc.) latest volume in her Curse of Clansmen and Kings series chronicles not only a forbidden love, but a clash of ancient civilizations as well. The time is A.D. 24; the settings include Roman-occupied Britannia and Gaul; and the narrative follows Catrin, a Celtic warrior princess. In previous entries, readers have watched as Catrin indulged in a forbidden love affair with Roman soldier Marcellus, the son of Roman envoy Lucius Antonius. The author threw every conceivable complication in the path of her star-crossed lovers, from tribal warfare and supernatural Druidic prophecy to filial duty, which called on Catrin to defend her father’s kingdom from both the forces of the Roman Empire and the schemes of her own banished half-brother. This volume finds Catrin at a low point: She’s been enslaved by a Roman commander who sees her (and her purported mystical connection to the god Apollo) as a key to his own ambitious climb. Her lover Marcellus has had his memories of their relationship magically suppressed. Catrin is living in Roman encampments disguised as a young man named Vibius, a medical assistant grudgingly endured by the soldiers around him. The book’s action shifts frequently from the Roman frontiers to Rome itself, following its two main characters and a well-realized assortment of secondary players through a narrative liberally peppered with both local intrigues and tense action scenes.

Catrin, Tanner’s central fictional creation, continues to deepen in complexity and elicit audience sympathy; her character is often refreshingly relatable. This is usually true of her paramour Marcellus, whose adventures readers follow in Rome and Gaul. But when scenes feature the two of them together, the author can sometimes yield to the kind of breathless, purple prose typically connected in most readers’ minds with a segment of the romance genre: “The heat from her body warmed his. He couldn’t let go, hearing her moans of arousal.” One of the novel’s most ambitious gambits is its richly atmospheric blending of supernatural elements into the broader story. The tale features ghosts, animal familiars, shapeshifters, and all kinds of spiritual communications, and Tanner’s skill at interweaving these elements is shown by how seamless the whole process feels. The book’s glimpses of the world of the frontier Roman army also mostly ring true, with tensions between Marcellus and his men uniformly well drawn, particularly on the several occasions when the savagery of the soldier’s own enlisted men shocks him (“The stark reality that mutilated bodies were all around him finally struck him like a brick”). This kind of fidelity to research will please readers familiar with this period of Rome’s occupation of Britain (they will likely be hunting for a mention of the legendary British resistance fighter Boudicca, and they won’t be disappointed). This is a strong entry in Tanner’s enjoyable series.