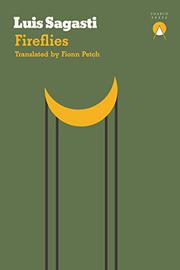 A postmodern work of fiction made up of neatly assembled and interpreted facts, the first of Argentine writer Sagasti's books to be translated into English.

It makes good sense that by day, Sagasti works as a museum curator, for this is a diligently collected series of oddments that help make sense of how the world works—and, as Sagasti writes, that it works at all is a marvel, since “for the machine to keep running, it’s better not to mention certain things.” Those certain things might include matters of family dysfunction or historical inconveniences; whatever the case, Sagasti enjoys turning them up and looking them over, counseling that in a world full of people as cold as the distant heavens, “we should seek out only the fireflies,” never mind that they die just like everything else. Sagasti keeps the theme of his title alive and at work throughout this brief book, which turns into a lively meditation on how things connect and cohere of the sort that Guy Davenport would have approved. One firefly is the German artist Joseph Beuys, shot down as a Luftwaffe pilot over Russia and briefly held by a Tatar shaman who allays his fears by pointing to the flickering stars—and then, it seems, implants those stars in Beuys’ head, for “shamans travel into the skies in search of the sick person’s soul in order to return it to their body.” If shamans can do it, so can the time-traveling Billy Pilgrim, another prisoner of war, of Kurt Vonnegut’s novel Slaughterhouse-Five; and the Tatars may have taken an idea or two from Antoine de Saint-Exupéry, another flyer whose novel The Little Prince was translated into their language. In the manner of a well-functioning ecosystem, everything in Sagasti’s book connects to everything else, and it’s a subtle marvel—especially the surprise ending.