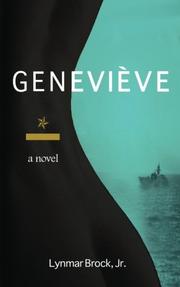 Brock (In this Hospitable Land, 2011, etc.) returns with a junior naval officer’s alternately romantic and tragic romp around Europe with his French lady love.

Thorp Karnin, an ensign in the U.S. Navy, is an unsympathetic leading man. He’s handsome, educated, motivated and charming. He’s also arrogant, cocky and self-involved. This combination of characteristics provides the foundation for an engaging and multifaceted protagonist who is both appealing and appalling. Brock’s novel, spanning several European countries, revolves around the relationship of Karnin and Geneviève Blondin, a young French woman touring Europe on her own for the first time. Geneviève (Genny) is beautiful and naïve, completely taken by Karnin’s charm and confidence. The couple embarks on a whirlwind romance, meeting first in Naples and again in Cannes. Yet just as Karnin inevitably begins to lose interest (conveniently when he is to ship out), Genny discovers she is pregnant with his child. Aboard the USS Spencer his competence and brains have earned Karnin a promotion, but he is not well-liked or trusted and he refuses to take his responsibilities seriously. Events physically come to a head when the Spencer collides with a British merchant ship during Karnin’s watch. Although the ship manages to limp toward port, there are numerous fatalities. Seemingly troubled only by self-interest, Karnin is quick to throw blame elsewhere, while sailors all around him struggle to come to grips with the horrible accident. The city of Gibraltar provides the setting for the final scenes, as Karnin must face both an inquiry and his feelings for Genny. Brock artfully creates suspense as he narrates Karnin’s interactions with Genny and his fellow officers. He subtly hints at tragic events, providing the reader with just enough foreshadowing to build the drama. In addition, Brock’s beautifully crafted descriptions of Mediterranean scenery— a view “ringed by the mountains leaping up from the water and crowned by orange and lemon groves”—provide a stunning backdrop to the story of romance and tragedy.

A seaworthy story of love and unhappiness.