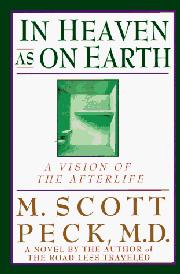 IN HEAVEN AS ON EARTH

A Vision of the Afterlife
by M. Scott Peck
BUY NOW FROM
AMAZON
BARNES & NOBLE
GET WEEKLY BOOK RECOMMENDATIONS:

 An allegorical glimpse of the soul's post-death experiences from popular guru and erstwhile therapist Peck (In Search of Stones, 1995, etc.). Finding himself near the ceiling of his bedroom, Daniel Turpin, an author and psychiatrist, briefly looks down on the waxy, gray body of a 73-year-old man before he gets whirled into a vortex and embraced by the light. Peck describes in a first-person narrative how Daniel next finds himself lying down (without a body) in a simple but strangely comforting small green room where he is visited by Sam and Norma, who, he feels, resemble Mormon missionaries but turn out to be his official ``Greeters,'' charged with introducing him to his new life. In subsequent chapters, Daniel meets his wife and his son Tim, now an advanced spirit who, however, never quite answers Daniel's excited questions. There's even a sex scene on a hillside overlooking Assisi, where Daniel is all but seduced by the erotic charms of a spirit named Susan, who turns out to be Satan. The shifting of shapes and scenes is rather like the virtual-reality programs of Star Trek, and indeed Daniel learns that the body, like all things visible, is really a collection of psychic projections from which souls can learn to free themselves. Thus an obese woman, Trish, is literally caught in her own self-image (learning to let go of it is her Purgatory), whereas Hell is a giant financial agency whose employees can never bear to leave. Peck makes clever use of popular near-death motifs and Tibetan Bardostyle confrontations. He admits his debt to C.S. Lewis but avoids the latter's brand of Christianity. Unsettlingly, Daniel (who, after all, seems remarkably like Peck's alter ego) frequently reminds the reader what a great visionary and therapist he was on earth. Useful psychological insights in a loose New Age framework.

DENIAL OF THE SOUL
by M. Scott Peck
Nonfiction

THE ROAD LESS TRAVELED AND BEYOND
by M. Scott Peck
Nonfiction

IN SEARCH OF STONE
by M. Scott Peck
Nonfiction

A WORLD WAITING TO BE BORN
by M. Scott Peck

HERE AND THERE
by Karen Dalin
Nonfiction

THE MAP OF HEAVEN
by Eben Alexander
Newsletter sign-up