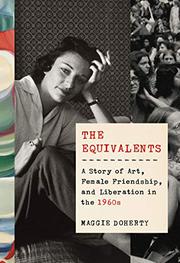 A Story of Art, Female Friendship, and Liberation in the 1960s
by Maggie Doherty
BUY NOW FROM
AMAZON
BARNES & NOBLE
LOCAL BOOKSELLER
GET WEEKLY BOOK RECOMMENDATIONS:

The story of the first scholars to participate in a “messy experiment” at Harvard’s Radcliffe college.

The 1950s and ’60s were tough for educated women, especially those who wanted to be writers or artists. Men dominated academia and literature, and women were expected to stay home and care for their husbands and children. So in 1960, microbiologist Mary Ingraham Bunting, Radcliffe president and mother of four, created the Radcliffe Institute for Independent Study, a fellowship program to provide a stipend and office space to help “intellectually displaced women” become scholars and artists while also caring for a family. In her debut, Doherty, who teaches writing at Harvard, tells the story of several of the Institute’s first scholars, women who called themselves the Equivalents because the Institute “required that applicants have either a doctorate or ‘the equivalent’ in creative achievement.” The author focuses on three of them: Anne Sexton, who “came from New England wealth” yet endured demons that precipitated several suicide attempts; fellow poet Maxine Kumin, with whom Sexton forged an enduring friendship even though Kumin came from a less privileged background; and writer Tillie Olsen, “a first-generation, working-class American, an itinerant, and an agitator” who named her first daughter Karla after Karl Marx and was the first among her cohort to note that “the true struggle was the class struggle”—i.e., not every woman “had the time, resources, and education” to immerse themselves in creative endeavors. Other Institute scholars, such as sculptor Marianna Pineda and painter Barbara Swan, are also mentioned. Digressions about women peripherally connected to the scholars may have been an attempt to place the graduates’ post-Institute work in a broader perspective, but it feels as if Doherty didn’t have enough material about these scholars to fill an entire volume. When she sticks to her subject, the book is superb, especially when she recounts Sexton’s personal struggles and offers close analyses of each author’s works.

A welcome spotlight on an overdue “experiment.”