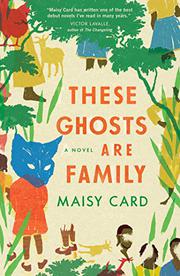 THESE GHOSTS ARE FAMILY

Generations of a Jamaican family grapple with the legacy of slavery and secrets.

“Perhaps, a life does not belong exclusively to one person,” thinks a character in Card’s debut novel, a rich and layered story about several generations of a Jamaican family. Secrets, Card shows, are part of what bind us together. One of this family’s biggest secrets involves Abel Paisley, who leaves Jamaica for England in the 1970s. When another Caribbean dock worker is killed in an accident and the white workers mistakenly think it’s Abel, Abel assumes the dead man’s identity. Abandoning his wife, Vera, and two young children, he marvels over “the one time racism worked” in his favor. Abel marries again and builds a new life in New York as the proprietor of a West Indian market, which turns out to be difficult in all new ways. But Card’s story doesn’t end there. She’s only just beginning. A public librarian who was born in Jamaica and raised in Queens, she brings to life Abel’s ancestors and descendants and those whose lives intersect with theirs, among them Abel’s abandoned wife; the servant who loved her; a precocious out-of-wedlock granddaughter; and the white descendant of the plantation owner who once enslaved and terrorized the family. This is a wonderfully ambitious novel: It sprawls in time from the uncertain present to the horror of slavery on a Jamaican plantation, examining racism, colorism, and infidelity and how they obscure and fracture a lineage. A gifted storyteller with an eye for detail and compassion for all her flawed characters, Card ends the book with an unsettling ghost story about insatiable hunger. We all hunger for something, she tells us: love, acceptance, freedom, an understanding of the past to know who we are, because our lives are never just our own.

An intriguing debut with an inventive spin on the generational family saga.

HOW TO LOVE A JAMAICAN
by Alexia Arthurs
Newsletter sign-up