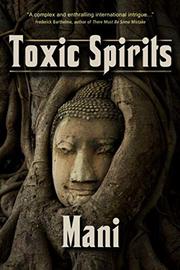 An American expatriate in Thailand stumbles on a doctor’s bizarre genetic experiments in this debut novel.

After widower Benton Sims retired from his career as a Washington, D.C., intelligence analyst, he decided to move to Thailand. He spends his days hanging around the expat pub in Prajawan, drinking margaritas, swapping stories with the local transplants, and pining for his dead wife, Sylvia. There, he watches Siri perform; she’s the frontwoman of the Exploding Heads who hails from a tribal village in the Golden Triangle. Then, out of the blue, Siri disappears. Benton learns the rock singer had been a critic of the drug trials conducted among her people, the marginalized Palin, and that this has forced her to go underground. Benton seeks out Pierre Montha Bulsani, the physician who conducted the trials, but he unwittingly becomes a test subject himself. As the drugs begin to change Benton in strange and unexpected ways, he is drawn ever deeper into Pierre’s mysterious realm, where dead people turn out to be alive, the living are in danger of becoming dead, and the full, terrible potential of Thailand’s hidden plants may unlock the ancient, untapped potential of humanity. So much for a quiet retirement on the beach. Mani tells his story in taut, highly descriptive prose, capturing his Thai setting’s cornucopia of sights and tastes: One character sees “clusters of pimpled red lichees whose insides he remembered as soft and translucent, tangy-sweet and throat-tickling, and next to them were their scrumptious cousins the dumpling-like longans, and then bunches of thorny rambutans, their flavor acrid like over-ripened grapes.” The players are given elaborate backstories, and the thriller’s interests are varied and ambitious. Even so, the plot feels a bit shapeless at times, as though the author is trying to cram a lot of distinct components into one slightly cumbersome structure. But fans of more literary-tinged genre offerings like those of Chris Abani or John le Carré will enjoy Benton’s strange—even phantasmagoric—adventures in Thailand. Replete with questions regarding medical ethics and technologies, the book serves as the first volume of a trilogy.

A slightly contrived but ultimately enjoyable thriller set in the shadowy world of medical experimentation.