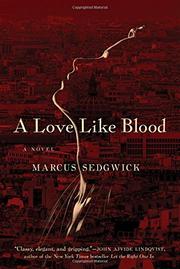 In 1944, Jackson visited the Musée des Antiquités Nationales. Wandering the grounds, he stumbled into a bunker, where he glimpsed a nameless man drinking a young woman’s blood. Shocked and fearful, he fled. War over, Jackson continued his medical studies, eventually becoming a researcher in hematology at Cambridge University, but his memory of the bunker scene, tinged by guilt, persisted. Thus begins a tale of blood obsession, ripe with symbolism drawn from St. Catherine of Siena, Dante, and from psychology giants like Freud and Ernest Jones. Remembering the bunker scene, Jackson eagerly accepts an invitation to a Paris conference. There, while revisiting the Saint-Germaine museum, he meets Marian, an American Ph.D. student, and immediately falls in love. Marian, however, is teaching English to a man named Verovkin, who turns out to be the bunker blood-drinker from years before. A stumbling romance develops, but Marian, in Verovkin’s sway, is killed, and Jackson becomes obsessed: "I wasn’t sure I wanted to live, but I did know one thing clearly: that I wanted him dead." Sedgwick’s tale chronicles Jackson’s mania: Jackson follows Verovkin to Avignon, then Lusanne, and finally to Sextantio, Italy. In the intense narrative, Jackson devolves, a scholar descending into the Nietzschean abyss and turning killer, but Verovkin is static, left to interpretation either as a perverted hemolagniac or a mimic of serial killers like the Vampire of Düsseldorf.

In this macabre psychological thriller, Sedgwick offers atmospheric settings and a relentless, chilling plot that gives a whole new meaning to the idea of "blood feud."

THE DEMONOLOGIST
by Andrew Pyper
Fiction

THE SCHOOL OF NIGHT
by Louis Bayard
Fiction

THE HOUSE OF SMALL SHADOWS
by Adam Nevill
Fiction