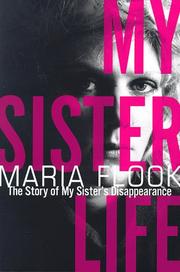 The Story of My Sister's Disappearance
by Maria Flook
BUY NOW FROM
AMAZON
BARNES & NOBLE
GET WEEKLY BOOK RECOMMENDATIONS:

 A retelling of the lives of two sisters, separated as young teenagers when each was caught in an undertow of drugs, prostitution, and mental institutions. But award-winning novelist Flook (You Have the Wrong Man, 1996, etc.), the younger of the sisters, seems to miss the point: This is a fairy tale, the story of Snow White and Rose Red, of a narcissistic (wicked queen) mother and a helpless (king) father. Rose Red (sister Karen) flees into the forest when she is only 14 with her almost-50-year-old lover. Karen begins her new life by pasting thousands of stolen Green Stamps into books to trade for merchandise she can sell. Pretty soon, she's trading her own body for cash that she hides in a hollowed-out Bible. Her Snow White sister, 12-year-old Maria, left behind, is obsessed with her loss of Karen--and also with her mother's various cruelties. Mother Veronica, a Vivian Leigh look-alike but ``more sultry,'' made her husband her priority, flirted often and obviously with other men, and faithfully tuned out her children. Father Ray, who might have reversed the family's downward spiral, foolishly stayed true to his wife even when his daughters began disappearing into psychiatric wards. As a writer, Flook shadows her sister's life, recording poignant and (literally) pregnant moments. Their babies are born at close to the same time; their mates stalk them similarly. Karen escapes from her man by jumping down two stories from a fire escape with her baby in her arms; Maria escapes from hers when Karen bashes him with a can of drain cleaner. Twenty years later, they both have new husbands, new children, and a fresh perspective on their mother, now a widow in an upscale retirement castle. Flook's book should sing with pain, but it's strangely flat, if skillfully written--the reflections of her reflections, minus the power of myth.

YOU HAVE THE WRONG MAN
by Maria Flook
Newsletter sign-up