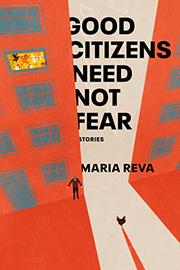 Stories centered on a particular apartment building in a small Ukrainian town.

In the last story of this debut collection, oligarchs, tycoons, and celebrities in post-Soviet Ukraine pay good money for transformative experiences. One popular option re-creates One Day in the Life of Ivan Denisovich: “Clients are carted out to the fringe of the Arctic Circle,” Reva writes, where “they must mop the guardhouse, lay brick walls with quick-dry mortar, fight over stone-hard bread,” all while “a guard flogs them.” Reva’s world tips slyly from Soviet-style absurdism to a more fantastical surrealism. Each of these stories is connected, in one way or another, to an apartment building in Kirovka, Ukraine. In the book’s first half, the Soviet Union still stands; in the second half, it has fallen. Characters appear and reappear in various guises. In “Bone Music,” Smena, who hasn’t left her apartment in a year, earns a living making copies of illegal vinyl records onto X-ray film. In “Novostroïka,” Daniil argues with a town hall clerk who insists that his apartment building does not, in fact, exist. “What do you mean?” he asks. “I live there.” “According to the documentation, you do not,” she responds. Reva has a wonderful sense of humor and an equally wonderful sense of the absurd. But the book is slim enough that the reappearances of certain characters and images feel overdone. Smena’s X-ray music comes back several times. So does Mikhail Ivanovich, a low-level apparatchik who, in “Letter of Apology,” is assigned to track a famous poet; later, in “Lucky Toss,” he winds up working for him. The effect is somewhat claustrophobic. Still, Reva is clearly a talent to watch: Her prose has a neat efficiency, and her stories are as memorable as they are unique.

The world Reva creates slips fluidly from the surreal to the absurd to the grittily realistic.