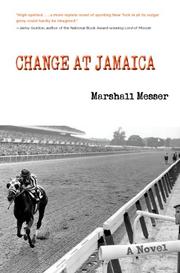 The setup could be Elmore Leonard by way of a somewhat more mature J.D. Salinger: Messer’s protagonist, who would appear to be more than a little like him, is a veteran of Woodstock who hasn’t been able to handle much since. A college dropout, Eddie Sacks is planning his next move while Nixon is planning his, and with about as much success. Part of his plan is to get out from under the sway of his father, the Captain, with whom Eddie shares an affinity for the racetrack, cigars and a good drink. “One thing about the track,” Eddie tells us early on, “it was the only place I could get along with the Captain.” Indeed, in his Zeus and Cronus moments, Eddie finds himself wishing nothing but the worst for old Pops, whom everyone else loves. The Captain’s got other worries, though, and no end of schemes, the worst of them involving his shlimazel brother, Gene. Everyone, well, almost everyone, loves the Captain until things go awry, when he shows his true colors, grumping of Gene, “One fuck-up after another and I always have to pay for it.” Ah, but isn’t that what families are for? The caper, with its mobsters and mooks and high-concept crime, is a peg on which Messer can hang a lively tale of family feuding and the kind of talking past one another that always takes place when blood kin are involved, it seems, on which he layers an impressive amount of period detail—and detail, period—that’s exactly right, from the way ash falls from a cigar to the champion racehorse Secretariat’s “blanket of daisies” to the sights and sounds of that star-crossed year of our lord 1973.

A pleasure to read. And though the Captain might have other plans, we’d like to know of Eddie’s further adventures.