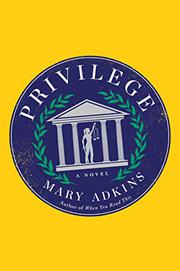 The lives of three women are irreparably changed after a sexual assault accusation rocks their college campus.

Adkins’ (When You Read This, 2019) sophomore novel follows Annie, Bea, and Stayja as they navigate the complexities of Carter University. When Annie, a self-conscious white scholarship student, accuses Tyler—a fourth-year student and the son of Carter mega-donors—of sexual assault, all their lives begin to collide. Bea, a biracial student enrolled in the Justice Scholars Program, is assigned as Tyler’s student advocate—a job she finds complicated and unsettling as a feminist. Stayja, who's white, works at an on-campus coffee shop to help support her family and save money for nursing school. Over a series of deep conversations, Stayja and Tyler fall into a romantic relationship of sorts. After the accusation goes public, Stayja chooses to believe Tyler even when her friends and family express their concerns. Adkins' writing provides a multifaceted portrayal of campus life and politics in the #MeToo era. One moment in particular shows how deftly and honestly this novel treats trauma. Annie cycles through confusion, rage, and every emotion in between. When she thinks back to confronting Tyler about the assault (which he vehemently denies), she tries to diagnose her reaction: “I recall hope so vicious that it sliced through me, disguising itself as belief. Because while I don’t think I did believe him, I wanted to believe more than I’d ever wanted anything.” The diverse cast of characters helps portray the way race, class, and gender affect power dynamics and inform our worldviews. Following a traumatic climax, the novel races too quickly to its ending, though it’s both satisfying and realistic. In the wake of their suffering, Annie, Bea, and Stayja find ways to heal with hope and disillusionment in equal measure.

A timely and resonant novel.