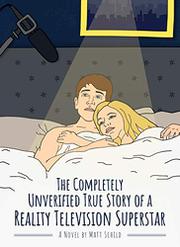 THE COMPLETELY UNVERIFIED TRUE STORY OF A REALITY TELEVISION SUPERSTAR

A former reality star is forced to return to the show that once destroyed his personal life in this comic novel by Schild (Aversion Therapy, 2012).

Eight years ago, Mick Rhodes became famous—or infamous—for an incident that occurred on the reality television show House Rules. Mick walked in on his fiancee, Molly Gipson, in bed with another man, Parker Peppercorn, and promptly engaged Parker in a fistfight. The scene became the stuff of trash TV legend—“Entertainment Weekly dubbed the ‘Parker and Mick incident’ as its number two most unbelievable moment in reality television history”—and Mick has spent the years since hiding away from the public eye behind the desk of his comic-book shop. When his old cast mate and only real friend, Annie Windham, begs him to participate in a House Rules reunion, Mick agrees despite his better judgment. The catch is, the show is formatted as a road trip. This means that he’ll be living in an RV for two and a half weeks with the rest of the cast, including Parker and Molly. As Mick is forced to complete asinine challenges during the day and ignore the sounds of Parker and Molly’s attention-seeking lovemaking at night, he tries to figure out how to survive the trip with his dignity intact. Then he finds out Annie’s husband is talking divorce, and Mick discovers that he is not immune to a bit of reality show intrigue himself. Schild’s prose is light and smooth, animating comic book–loving Mick’s bitter  voice: “I didn’t really care if I was intruding at this point, so I wandered over to the pair as if it were not patently obvious they were squabbling like Batman and Talia al Ghul.” The superhero obsession reads as rather generic in these days of the movies pouring forth from the Marvel Cinematic Universe, but Schild manages to fill the book with all the hookups, betrayals, and hijinks that one desires from an actual reality show. The author keeps the plot moving while still managing to wring some surprisingly astute comments on contemporary life out of the reality TV metaphor.

An enjoyable, cranky novel about an unwilling unscripted television actor.