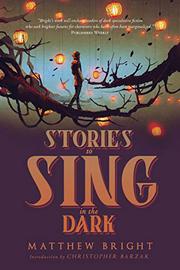 STORIES TO SING IN THE DARK

Ghosts, space travel, and murderous movie censors are among the obstacles to gay love in these phantasmagoric tales.

In his first short story collection, Bright (co-author: Between the Lines, 2019) mixes strands of magical realism, SF, steampunk, noir, gothic horror, and homages to literary classics, filtering it all through a gay sensibility. These tales are boldly imaginative: A new hire at a cosmic library indexes lost works recovered by time-traveling collectors—never finished novels, a teenager’s poetry jottings, books burned by Nazis—and begins an affair with French writer Jean Genet; a scientist in a seedy Los Angeles applies his anti-gravity technology to a string of lovers; a modern-day Dorian Gray moves uninfected and forever young through San Francisco’s AIDS epidemic while his partners die off. In a rollicking takeoff on the children’s book The Wind in the Willows, a tough-talking rat, mole, badger, and gender-bending toad ricochet through a furry criminal underworld. In other inventive tales, a man realizes that he is the stereotypical tragic gay character in an Edwardian period movie whose other characters panic when he declines to commit suicide as scripted; the lesbian concubines of a Chinese empress travel in her tomb on a steam-powered voyage to a distant planet—and consider cannibalism when the food runs out; and a tomb raider and her brothel madam daughter hitch a ride on an airship and dodge British soldiers and zombies to purloin a pharaoh’s soul. A striking concluding novella finds an Englishman accompanying his lover to a shadowy family manse in Germany, where he unearths a past of perverted cruelty. Bright combines vigorous narratives with prose that is atmospheric, slyly humorous, and saturated with evocative imagery. (“If my phantom watchers in the windows opposite are looking, they will see us as we rise into the sky, one man clinging tight to another as they ascend like balloons that have slipped from your grasp, until the atmosphere becomes rarefied and thin, and breath freezes before our faces.”) The result is a wildly entertaining set of yarns that combine thrills with soulful reflection.

A dazzling collection of literary fantasy with never a dull moment.