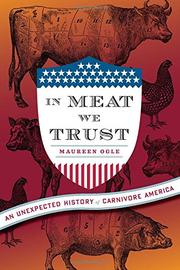 IN MEAT WE TRUST

Historian Ogle (Ambitious Brew: The Story of American Beer, 2006, etc.) explores the historical foundations and inaccuracies surrounding the story of the industry that supplies the beef, chicken and pork to America’s carnivorous multitudes.

The author does a solid job laying out the early steps involved in the building of America’s meat industry: the early beginnings of farmers successfully farming cattle, corn and hogs in northeastern Virginia; the reign of the big meat packers; the contentious relationship between President Theodore Roosevelt and activist Upton Sinclair; the rise of chain grocery stores in the 1920s and the issues of packaging, distributing and producing a uniform product. Ogle chronicles the stories of the early pioneers in the meat business, including the “dressed beef men” such as Philip Armour, Gus Swift and others, who “designed slaughterhouses that emulated factories and incorporated those into complex, nationwide distribution systems,” and Jesse Jewell, who in three decades, beginning in the mid-1930s, built an empire worth millions in the chicken business. Ogle’s accessible recounting of the early days of the meat industry provides the solid framework for her wide-ranging exploration of the industry during the second half of the 20th century. She delves into the legislation, various reform movements and consolidation of the meatpacking industry in the 1960s and ’70s. She also looks at the contemporary struggles of alternative meat producers and nonfactory farmers—e.g., Mel Coleman and his Natural Beef, and Bill Niman and Orville Schell, who began a cattle ranch in Northern California in the 1970s, supplying natural beef to local restaurants.

An informative and entertaining narrative of the complexities of a massive industry, in which the author lays bare Americans’ sense of entitlement and insistence on cheap and abundant meat and questions what that voracious appetite has wrought on our bodies and the environment.