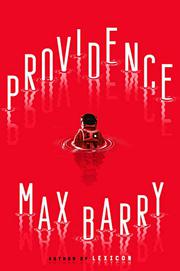 A heavily armed starship heads into deep space to combat a race of alien invaders.

Australian author Barry (Lexicon, 2013, etc.) made his bones on satires of corporate life before diverging into fast-paced fantasy with his last offering. Seven years later, he swerves yet again into hard science fiction that bears influences from everything from Ender’s Game to The Martian to 2001: A Space Odyssey with a dash of Starship Troopers and the Alien franchise here and there. The title refers to a massive starship, the fifth of its kind, which has been dispatched to find and kill an invasive alien species known to most earthlings simply as “salamanders.” This follows a first-contact skirmish seven years earlier that left its survivors devastated and led Earth’s leadership to develop massive AI–driven ships designed for zero-casualty warfare. While Providence is a big ship, it has a small crew, consisting of commander Jolene Jackson, weapons specialist Paul Anders, life manager Talia Beanfield, and intelligence officer Isiah “Gilly” Gilligan, the civilian tasked to the starship by the Surplex corporation. They’re a diverse bunch, representing a lot of character tropes, from the square-jawed captain to the secretive madman to an unlikely survivor. Their current mission is to go into what the military terms the “Violet Zone,” a communications dead zone akin to Star Trek’s intergalactic nebulas. After a series of successful raids on the salamanders, things go awry when the ship’s AI starts malfunctioning and the enemy grows more tactical, ultimately forcing the crew to the surface of a planet where they’re forced not only to struggle to survive, but also to face their enemy instead of simply nuking them from orbit. (It’s the only way to be sure). Yes, the plot and the technology are lightly derivative of other works in the SF canon, but at least Barry is pinching all the cool stuff from the best influences.

Something for everyone: space combat, interpersonal tension, and aliens, ultimately leading to a story about survival.