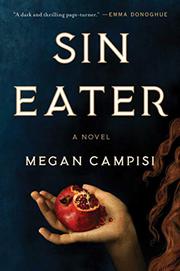 A teenage girl defies the society that would make her an outcast in Campisi’s semihistorical, semidystopian debut novel.

When 14-year-old May is caught stealing, the punishment dictated by the court is a grim mercy indeed: Instead of being hanged, she will instead become a sin eater, expected to move silently through the world, neither speaking nor being spoken to, and performing funeral rites that will allow the dead to leave behind their earthly sins as they move into the afterlife. Sin eaters hear a dying person's last confession and then consume food in honor of the dead; each food symbolizes a particular sin, from disobedience to lust to betrayal. As they consume the food, sin eaters take each sin onto their own souls. When May attends the Eating for one of the queen’s ladies, she is disturbed to see a deer’s heart included in the spread, for animal hearts symbolize murder—and the deer’s heart, the murder of a child. May’s mentor refuses to consume the deer’s heart, as it wasn’t part of the original recitation of sins, and she is taken away and tortured to death. May becomes determined to get to the bottom of the mystery—what sin is in danger of being exposed, and who would kill to protect this secret? While the tradition of the sin eater is based on historical fact and the setting is clearly supposed to be inspired by Elizabethan England, Campisi deliberately creates an alternate world where Queen Bethany, daughter of King Harold II and the disgraced Alys Bollings, has taken the throne after the death of her half sister, Queen Maris, in the midst of a religious civil war. While her decision to build this world, a thinly veiled version of true English history, is a curious one, it does add an element of fantasy to the novel that’s very much reminiscent of The Handmaid’s Tale. In this way, it transcends its historical roots to give us a modern heroine.