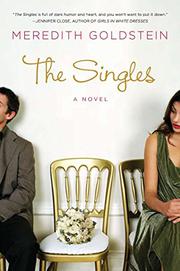 Unconvinced that there is any upside to being a bridesmaid, New York City casting director Hannah nonetheless feels a sense of obligation when her dear college friend Bee requests her services. Aside from the bother of having to buy a special halter bra for the occasion, singleton Hannah is anxious about seeing her ex Tom, who will be there with his new girlfriend, a guidance counselor named Jaime. Staying with Hannah is another college friend, Vicki, a creative type with a dull corporate job in Rochester. She also has a mild case of depression that she combats with a special sunlamp she carries around in a guitar case. Vickie and Hannah’s Texas friend Rob, alas, is a last-minute no show for the wedding, although his presence is missed. A laid-back underachiever with a tendency to disappoint people, Rob carries a torch for Hannah, although his only commitment is to his dog Liz, a rescue mutt with epilepsy. Through texts, he gets a play-by-play of the event, while struggling with his own mixed feelings—and a sudden emergency. To calm her pre-wedding jitters, Hannah mixes a couple of mystery pills (offered by the controlling matron-of-honor, Dawn) with alcohol, and proceeds to make a fool of herself during the inevitable confrontation with Tom, who remembers the end of their relationship far differently than she does. Inebriated as she is, Hannah catches the eye of Phil, a strapping young man who is only attending as a favor for his sick mother. And Vicki bonds with Bee’s uncle Joe, a successful, divorced businessman from Las Vegas with a thing for wistful young brunettes. Funny and sad with easily identifiable characters, Boston Globe advice columnist Goldstein’s debut makes the most of some very familiar scenarios.

Charming wedding farce with a bit of depth.

THERE'S CAKE IN MY FUTURE
by Kim Gruenenfelder
Fiction