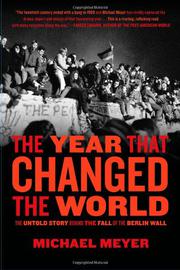 THE YEAR THAT CHANGED THE WORLD

The Untold Story Behind the Fall of the Berlin Wall
by Michael Meyer
BUY NOW FROM
AMAZON
BARNES & NOBLE
LOCAL BOOKSELLER
GET WEEKLY BOOK RECOMMENDATIONS:

A journalist then posted to Germany and Central Europe delivers a coolheaded reconsideration of the revolutionary fervor that tore down the Iron Curtain in 1989.

Former Newsweek bureau chief Meyer, now director of communications for the UN secretary-general, attributes the angry popular swarming of the Berlin Wall on Nov. 9, 1989, to the culmination of rebellious forces within the communist satellite countries, rather than to any action by Ronald Reagan (“Mr. Gorbachev, tear down this wall!”) or other U.S. government officials. The author aims to give credit where it’s due, specifically to a “small band of East European buccaneers,” including Hungarian Prime Minister Miklos Nemeth, a technocrat newly appointed in 1988 by a group of reform-minded socialists taking their cue from then-new Soviet leader Mikhail Gorbachev, who, according to Nemeth, had “taken the lid off a boiling pot.” Nemeth and his cohorts intended to repair the shattered Hungarian economy by subtly introducing capitalism and democracy, thereby aligning the country with the West. They took aim at the Berlin Wall, by first inviting the overrun of Hungary’s border with Austria by East German seasonal tourists, who could then escape to the West. The challenge to Soviet control was unmistakable, yet Gorbachev had no interest in a violent retaliation. Elsewhere, Meyer writes, major reforms were underway. Gen. Wojciech Jaruzelski, “the Polish Antichrist, the poster boy of communist oppression,” began to share power with the Solidarity trade union after elections in Poland. Inflexible politician Erich Honecker, who supervised the construction of the Berlin Wall, had been squeezed out of power in East Germany. In Prague, huge demonstrations filled Wenceslas Square. Meyer skillfully grasps the crux of these events and ably conveys their remarkable significance.

Meyer “liberates” the record with sagacity, precision and remarkable clarity.

THE ROAD TO SLEEPING DRAGON
by Michael Meyer
Nonfiction

IN MANCHURIA
by Michael Meyer
Nonfiction

THE LAST DAYS OF OLD BEIJING
by Michael Meyer

THE TUNNELS
by Greg Mitchell
Indie