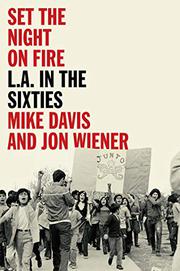 SET THE NIGHT ON FIRE

A vivid portrait of Los Angeles during a turbulent decade.

MacArthur fellow Davis (Old Gods, New Enigmas: Marx’s Lost Theory, 2018, etc.) and Start Making Sense podcast host Wiener (Emeritus, History/Univ. of California, Irvine; How We Forgot the Cold War: A Historical Journey Across America, 2012, etc.) experienced firsthand the political, cultural, and social upheavals that roiled LA in the 1960s. Davis was the Los Angeles regional organizer for Students for a Democratic Society and a member of the Southern California branch of the Communist Party. Wiener, who had participated in anti-war and civil rights activism from the time he was in high school, arrived in LA in 1969, quickly becoming a reporter for Liberation News Service, which provided to underground and college papers around the country reports about strikes, anti-war protests, and incendiary events such as the efforts of the California regents to fire philosophy professor Angela Davis. In addition to their own recollections, the authors mine abundant archival sources and interviews to create a richly detailed portrait of a city that seethed with rebellious energy. Much of that energy came from civil rights activists, with LA serving as “a major laboratory for the Black Power experiment.” Building on “the template of Black nationalism,” Mexican Americans redefined themselves as Chicanas/os, fashioning their own ideology and identity, as did Asian Americans, who lobbied for ethnic studies programs and, at UCLA, published a monthly newspaper that publicized the Asian American movement. Feminist groups—liberal, radical, and socialist—burgeoned, as well. Because the Los Angeles Times “was firmly and loudly right-wing,” the LA Free Press emerged as the nation’s first and most influential underground paper, disseminating news about racial unrest (such as the Watts uprising of 1965), gay rights (such as the founding, in 1966, of a group calling itself Personal Rights in Defense and Education, or PRIDE), and the repressive actions of the police department, mayor, and the state’s governor, Ronald Reagan.

A spirited history of urban unrest that laid the groundwork and inspiration for future activists and reformers.

ECOLOGY OF FEAR
by Mike Davis

I TOLD YOU SO
by Gore Vidal
Nonfiction