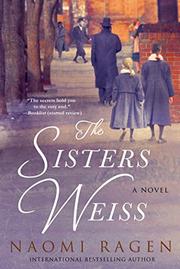 Ragen (The Tenth Song, 2010, etc.) sensitively explores the repercussions in an ultra-Orthodox Jewish family when one of its members leaves the fold.

It’s the early 1960s, and though Rose Weiss has seen Marilyn Monroe on the cover of forbidden magazines, she and her younger sister, Pearl, live in the strict world of the ultra-Orthodox in Williamsburg, Brooklyn, where knees and elbows must be covered and where each of them can expect to be married off by the age of 16. Though unable, at first, to articulate it to herself, teenage Rose comes to understand that this is not the life for her. Her self-discovery unfurls alongside a passion for photography but results in a series of heart-wrenching events, which culminate in total estrangement from her family. Rose’s story picks back up 40 years later in a circuitous way, when her college-student daughter, Hannah, is contacted by Pearl’s teenage daughter, Rivka. By now, Rose is a successful and famous photographer, and Rivka, raised ultra-Orthodox, is hellbent on following in her secular footsteps, not knowing that Rose’s pain from being alienated from her roots has never subsided. Where the first section of the novel is a simple story, told in deeply felt detail, the second section explodes in turmoil. Runaway Rivka is like a pinball in New York City, ricocheting impulsively from thorny Hannah’s apartment to Rose’s sanctuarylike dwelling, sowing drama along the way. Without the self-knowledge and direction that Rose had at her age, Rivka is less sympathetic, but her combination of ego and innocence seems fitting for 2007, when her story is set, and her future is every bit as vertiginous. Ragen uses Hannah’s role as a scholar of women’s history to remind readers that Rivka’s quest for freedom is as necessary and important as the plight of any subjugated woman in history, but the effect is didactic. Rose and Rivka are more convincing when they speak for themselves.

Of the complexities embraced in this intergenerational drama, some are harsh and difficult to relate to, while others are universal. The book is unflinching and surprisingly suspenseful.

THE COVENANT
by Naomi Ragen
Fiction

CHAINS AROUND THE GRASS
by Naomi Ragen
Fiction

THE GHOST OF HANNAH MENDES
by Naomi Ragen

I AM FORBIDDEN
by Anouk Markovits
Nonfiction