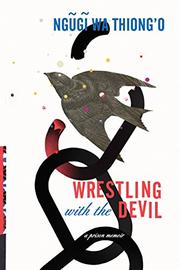 WRESTLING WITH THE DEVIL

A prison memoir of sorts from an activist author who maintains he has little interest in writing a prison memoir.

A prolific novelist, essayist, and academic, Kenya-born Ngugi (English and Comparative Literature/Univ. of California, Irvine; Birth of a Dream Weaver: A Memoir of a Writer's Awakening, 2016, etc.) published the original version of this material in 1982, and it focused on his imprisonment under the totalitarian regime of Jomo Kenyatta. Now, long after the Kenyatta tyranny, the author refocuses the narrative so that it is less about the specifics of abuses suffered under that regime and more about sustaining the spirit of resistance while subjected to years of incarceration. Specifically, it is about the writing of one novel, Devil on the Cross (1980), while in prison, a forbidden activity undertaken without resources and with a minimum of outside inspiration. The author wrote the book on scraps of toilet paper, drawing brief interactions with guards and fellow prisoners, typically kept isolated as another form of punishment. He had never been charged with any specific crime, but he had written plays that were deemed subversive, particularly as performed by locals within the community who had no acting experience. In his cell, he pondered the decades of struggle of African natives against colonial imperialists, “parasites in paradise,” whose inhuman mistreatment of the subjugated became the law of the land and the culture. “It was the culture of hedonism without morality,” writes the author, “a culture of legalized brutality, a racist ruling-class culture of fear, the culture of an oppressing minority desperately trying to impose total silence on a restive oppressed minority.” Within that context, he details the transformation of Kenyatta, another political prisoner, who was once hailed as the voice of the oppressed before becoming the oppressor. Newsweek dubbed the author “a naïve ideologue” while he was still in prison, but “principled” would be a more appropriate characterization.

BIRTH OF A DREAM WEAVER
by Ngugi wa Thiong’o
Nonfiction

WIZARD OF THE CROW
by Ngugi wa Thiong'o

OF AFRICA
by Wole Soyinka
Nonfiction

RUNNING WITH THE KENYANS
by Adharanand Finn
Nonfiction