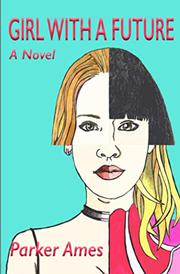 GIRL WITH A FUTURE

Ames offers a debut bildungsroman about a world-weary young Canadian woman who’s smart about business but less savvy about relationships.

Angie Cohen is 17 when her father dies, but she has two memorable brushes with death very soon afterward. First, at her high school’s semiformal dance, held at a funeral home, Angie has a sexual encounter with her date among some coffins; then she learns of the death of a close childhood friend. Angie feels bound by a sense of duty to her late father, so she devotes herself to running his coffee-machine maintenance business after graduating from high school. Between servicing the VendKing 2000 coffee vending machines and coffee makers at real-estate offices, strategizing about growing the business, and dreaming about traveling through Europe, Angie sidelines her plans to attend college. What follows is an episodic account of Angie’s stop-and-start efforts to find a fulfilling future; she also takes the words of a writer friend to heart: “Isn’t that what life is about? Chasing down your past.” Later, in Paris, Angie becomes involved with an artist and helps to kick-start his career—but forfeits a deferred acceptance to a university. When she returns home to Canada, she works as a bartender, and one gap year turns into two. Angie starts classes at one school, then leaves and starts again at another. The novel offers a character study of a young woman struggling with grief and possible depression. However, as Angie heals from her father’s death and finds her own way in life, there aren’t any compelling obstacles to her development, except her own indecision and uncertainty. Although the narration notes, “You make your own shit. Angie had proven this so far,” this description doesn’t quite ring true, as the protagonist is a consistently passive character who bounces from one place to another, even as she laments her lack of purpose. One enjoyable element of the book, though, is the depiction of Angie’s considerable business skills; she always has ideas for improvements—although at her bartending job, the higher-ups don’t effectively make use of her practical mind.

A meandering story would have been more engaging with a more active protagonist.