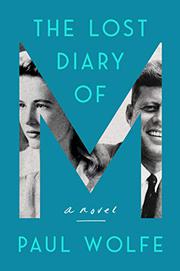 THE LOST DIARY OF M

A fictionalized diary of Mary Pinchot Meyer, the woman rumored to have stolen the heart of John F. Kennedy during his presidency.

Born into a wealthy Pennsylvania family, Mary Pinchot first met JFK when she was a teenager in boarding school. Years later, after marrying CIA agent Cord Meyer, Mary settled in Georgetown, where she and her husband regularly attended parties alongside several political heavyweights. It was in Georgetown that Mary reconnected with then-senator Kennedy. Following her divorce from Cord a few years later, Mary is thought to have developed an intimate emotional and physical relationship with JFK, and the book imagines this relationship as it may have evolved after Kennedy became president of the United States. Wolfe (Postcards From Atlantic City, 2015, etc.) uses Mary’s fictional journal to portray this elusive woman as a politically informed, bohemian artist whose forward-thinking attitudes may have played a role in Kennedy's political decisions, especially during the Cuban missile crisis. The author’s Mary Pinchot Meyer is convinced that Kennedy loves her more deeply than he has any other woman, including his wife. The closer Mary becomes with the president, however, the more she fears for her own safety. The author deftly simulates a complicated woman’s diary, creating a document that feels entirely authentic—which includes assuming a certain level of knowledge on the reader’s part about the primary players in several federal agencies of the early 1960s. True to its nature as a diary, the prose is often choppy and desultory, which results in a narrative that is sometimes difficult to follow. Even so, the author includes interesting political and historical details in the entries, shedding light on a woman with a front seat to American history.

THE SUMMER I MET JACK
by Michelle Gable
Newsletter sign-up