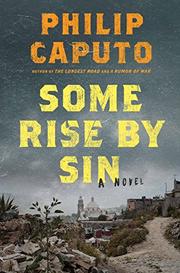 SOME RISE BY SIN

A novel that couldn't be more timely: the story of culture clash and compromise in Mexico.

Caputo’s eighth novel revolves around two Americans, a priest and a physician, in the Mexican village of San Patricio. This is not, the author tells us, “Cancún [or] Puerta Vallarta”; rather, it is the Mexico of our darkest, wall-building fantasies, “one vast bad neighborhood, East L.A. or the South Side of Chicago on steroids.” Lest such an image seem stereotypical, it’s not—because Caputo is an acute observer of human disorder and disarray. The priest here, Father Timothy Riordan, is conflicted: about his celibacy, about his faith, and most of all about his tenuous position between the townspeople and the authorities. The doctor, Lisette Moreno, is more settled, but that is to some extent due to her privilege; she has come to Mexico by choice. Complicating everything is the presence of the Brotherhood, a gang of narcos so casually brutal that their threats and violence are never anything but believable. The moral landscape is reminiscent of Robert Stone, particularly his 1981 novel A Flag for Sunrise, which also revolves in part around a priest adrift in chaos south of the border. Stone’s perspective, though, is more apocalyptic, or perhaps, most accurately, touched with madness; among the challenges (and rewards) of his writing is the sense not just that the center isn’t holding, but also that there is no center to hold. Caputo is a more traditional novelist, and his aims are, finally, less ambitious; for all its detailed evocation of life in the village, his book is more or less a character portrait, or a pair of character portraits, in which the Americans are always in the light. That makes for a more focused effort, especially in regard to Riordan, whose self-flagellations (both real and imagined) largely drive the narrative. “His anger drained away,” Caputo writes of the priest, “and a gloom dropped over him, like a hood over a man about to be hanged.” Ultimately, however—and despite the force of the writing—this makes the novel too neat, too predictable. Caputo is taking on a messy territory, in which there are no answers, and everyone must do what they need to get along. This is the promise of his novel, that such disruption is contagious, but in the end, the book portrays less the corruption of a tarnished world than the blight of a single errant soul.

This is a compelling novel that wraps up too neatly, belying the uncertainty and turmoil at its core.

THE VOYAGE
by Philip Caputo
Fiction