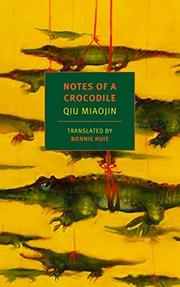 NOTES OF A CROCODILE

A college student’s romantic obsession with another woman threatens to derail her happiness.

Taipei in the late 1980s. Lazi is 18, newly enrolled in college, and describes herself as “an innately beautiful peacock” who is “pure carrion inside.” Depressed and self-harming over her attraction to women, Lazi enters into a toxic relationship with Shui Ling, a fellow student. During the course of their on-again, off-again unconsummated relationship, Lazi turns to a group of friends whose love lives are as complicated as her own. Qiu (Last Words from Montmartre, 2014), who died in 1995 at the age of 26, structures her essentially plotless novel as a series of eight notebooks that take us through Lazi’s college years. These notebooks can be unabashedly adolescent—sentences like “The glow on her face was like rays of sunshine along a golden beach” abound. Also true to the college experience are the long pages of abstract conversation Lazi and her friends engage in, usually late at night. But in many ways, Qiu’s willingness to show youth at its most self-absorbed and earnest is part of the book’s appeal. Most readers—perhaps especially those who identify as LGBTQ—will see themselves somewhere in Lazi’s agonized social circle. But Qiu also reminds her readers at every turn how truly isolating otherness can be: interspersed with Lazi’s musings, Qiu tells a kind of surreal, contemporary fable of a crocodile, the subject of equal parts bigotry and misplaced reverence. The crocodile’s plight, as it “got home from work [and] removed the sweat-soaked human suit clinging to its body,” serves as an odd, but perfect, metaphor for Lazi, whose true heartbreak is feeling so alien as to scarcely feel human.

A meandering, but moving, look at queer identity.

WRITTEN ON THE BODY
by Jeanette Winterson
Fiction