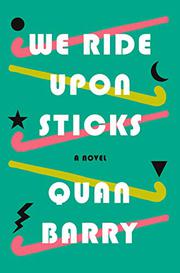 WE RIDE UPON STICKS

Almost 300 years after the town of Danvers, Massachusetts, hosted the infamous 1692 witch trials, a new coven rises to power.

The 1989 Danvers High School girls’ field hockey team (go Falcons!) is sick and tired of losing. Frustrated after yet another loss at a summer training camp, goalie Mel Boucher takes matters into her own hands by signing a “dark pledge” in a spiral notebook with a picture of Emilio Estevez printed on the cover: “Years later [Mel] would try and explain why she did it by saying that sometimes the Lord is busy and He needs us to be self starters, show a little moxie.” Emilio, whom right halfback Heather Houston calls an “alternative god,” shows his gratitude by improving the team’s performance in their next game, and one by one the rest of the players sign their names in the book, each of them given a cut-off slice of an old sock (in Falcon blue) to tie on their arm as a symbol of their pledge. When the official season starts and the Falcons start winning games, the girls feel Emilio pushing them toward their more devilish impulses. As they cause increasing mayhem around Danvers, the team can feel Emilio demanding more from them, and they worry they won’t be able to keep the magic going long enough to win the state championship. Barry (She Weeps Each Time You’re Born, 2014, etc.) is deeply witty, writing the narrator as a sort of omniscient group-think, the team speaking as one wry voice. Barry spends time with each of the team members and examines their struggles with the gender norms of the late 1980s as well as with race, identity, family, and friendship. Three of the characters are women of color who have complex relationships to being surrounded mostly by white people; a few of the girls discover budding nuance in their sexuality; and they all start to wonder if witchcraft is really about taking up space in a world that wants to keep you small. As Emilio pushes them further down the path of darkness, readers will cheer them on because what they’re really doing is learning to be fully and authentically themselves.