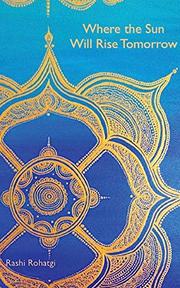 WHERE THE SUN WILL RISE TOMORROW

Two sisters’ personal lives get caught up in the changing politics of India in this historical novel.

Chandrapur, India. Sixteen-year-old Leela is training to become a teacher in the early 1900s, but she isn’t overly excited about her career, especially now that her betrothed, Nash, is coming home from Tokyo. He has studied engineering there the past three years, but due to the Russo-Japanese War, the British have ordered all Indian students to leave Japan. Her sister, 15-year-old Maya, is even more restless. “It’s a new world,” she says, dreaming of the end of school. “They have films now, and automobiles. Two years ago we never would have dreamt that we’d get a teacher training college. Two years from now the whole world may be unrecognizable. Why not dream up a place for ourselves within it?” When Nash returns, it is with a revolutionary zeal to unite Hindus and Muslims and throw off British rule—a zeal he attempts to spread to Leela and Maya. The sisters take his advice to try to merge the two girls’ schools—one Hindu, one Muslim. They bring the idea to Zainab, a Muslim colleague. But when Maya gets to know Zainab’s brother, Hassan, a Hindu-Muslim alliance that Leela did not bargain for takes root. Rohatgi’s (Fighting Cane and Canon, 2014) prose is measured and highly detailed, even when balancing the emotional lives of her characters. At one point, Leela narrates: “When Maya chews her cauliflower at dinner that night, her lips are exaggerated, her manner sullen and defiant. I can’t look at my father without feeling tears pool in my eyes, so I stare back at her as she tries to assess whether or not she should tell Papa everything.” The novel does an excellent job of placing readers directly into the politics of the time, highlighting the clash between old and new and between the region’s various subcultures. There are places where the plot drags a bit, but Leela and Maya are so carefully composed that readers will get caught up in this pivotal time in their young lives.