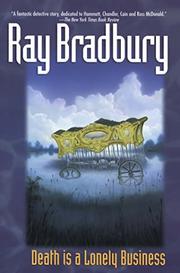 DEATH IS A LONELY BUSINESS

Though dedicated to the memory of mystery-writers Chandler, Hammett, Cain, and Macdonald, Bradbury's new novel--his first full-length fiction since Something Wicked This Way Comes--isn't really an homage to the hard-boiled detective genre. The narrator-sleuth--a young writer obviously based on the young Ray B.--is as soft-boiled as they come. The style is pure Bradbury: poetic, dreamlike, a trifle cute and gushy. And the tale--which feels more like a stretched-out short story than a bona fide novel--is a familiar, YA-ish fantasy about death and loneliness, with only the most superficial use of a murder-mystery format. It's 1949 in Venice, California, "the days when the Venice pier was falling apart and dying in the sea and you could find there the bones of a vast dinosaur, the roller coaster, being covered by the shifting tides." The unnamed hero lives in a shabby room, pines for his faraway girlfriend, befriends assorted Venice eccentrics, and hammers out Bradbury-ish stories for mystery/fantasy magazines. Then, one night, he discovers the drowned body of an old recluse--the first of several local "Lonelies" (a bedridden "canary lady," a dangerously obese ex-opera-singer, etc.) who die in seemingly accidental circumstances. But the young writer is convinced that someone--"Mr. Lonely Death"--is arranging these pathetic demises. So, though tormented by death-dreams and mocked by a tough/sweet local cop, the writer tracks down and duels the smelly psycho-ghoul who's been preying on Lonelies, "a happy child in the fields of the Antichrist." As a parody/pastiche of Forties shamus-fiction, this is halfhearted and off-target. As a nostalgic portrait-of-the-artist-when-young, it's rather coy and faintly pompous ("I would fight all the way with my Remington portable which shoots more squarely, if you aim it right, than the rifle of the same name"). And Bradbury's treatment of the shopworn theme is blatantly sentimental, essentially juvenile. Still, Bradbury fans will find distinctive pleasures on display throughout this inflated, repetitious fable: vivid visual images, from submerged lion-cages to "books clustered like vultures with their black feathers and dusty golden stares"; memorable characters, lavishly grotesque or whimsically earthbound (e.g., a terrible barber whose existence is fueled by a fantasy of having once known Scott Joplin); and--on nearly every page--quirky blendings of creepiness and humor, innocence and decadence, nightmare and cartoon.
Pub Date: Oct. 28th, 1985
ISBN: 0380789655
Page count: 244pp
Publisher: Knopf
Review Posted Online: March 20th, 2012
Kirkus Reviews Issue: Sept. 15th, 1985

QUICKER THAN THE EYE
by Ray Bradbury
Children

AHMED AND THE OBLIVION MACHINES
by Ray Bradbury
Fiction

FROM THE DUST RETURNED
by Ray Bradbury
Sci-Fi

ONE MORE FOR THE ROAD
by Ray Bradbury
Fiction

THE STORIES OF RAY BRADBURY
by Ray Bradbury
Fiction