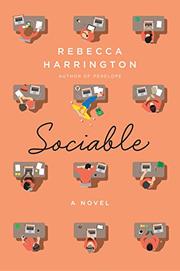 A young woman traverses her 20s and the toxic landscape of New York media in Harrington’s (I’ll Have What She’s Having, 2015, etc.) novel of millennial manners.

Well into her tenure in New York City, aspiring journalist Elinor Tomlinson has a job as a nanny, a painfully self-important literary boyfriend from college, and a foam pad that serves as a bed. That is, until her boyfriend’s mother—a hotshot essayist who writes incisive columns like “A Mother’s Guilt” and “What Gen X Forgot”—hooks her up with a job at Journalism.ly, a BuzzFeed–esque startup, where she’s in charge of viral content. Meanwhile, her boyfriend, Mike, is writing Important Think Pieces about Important Topics like waste management for Memo Points Daily while surrounded by small, Virginia Woolf–looking girls with appropriately literary credentials. Mike doesn’t have much use for Elinor’s new job (Mike has few redeeming characteristics), but Elinor, it turns out, has a gift for writing high-traffic posts, even when she’s miserable, which she soon is: Mike unceremoniously dumps her, coming back to their shared hovel only to collect his stuff (including a “This Is What a Feminist Looks Like” T-shirt and his Gatorade); Elinor is forced to a “semi-studio” in Queens (shared bathroom, no kitchen). In general, Elinor is drowning in a sea of lackluster men with inexplicable standing; not just Mike or her subsequent online dates, but her two male bosses, who have both magnanimously appointed themselves her “mentor.” And yet Elinor, despite these obstacles—principally, being 20-something and a woman in New York—begins, slowly, haltingly, to find a more functional version of herself. No one really says much of anything, thanks to Harrington’s preference for mumblecore-style dialogue, nor do the characters particularly transcend their archetypes, but Harrington captures the oppressive narcissism and frustrated ambitions of Elinor's world with nauseating accuracy.

Frothy on the surface with teeth underneath.

THE FUTURES
by Anna Pitoniak
Fiction