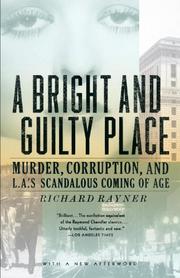 A BRIGHT AND GUILTY PLACE

Noir-tinged portrait of the sick soul of America’s Promised Land.

Rayner (The Associates: Four Capitalists Who Created California, 2007, etc.) traces the roots of the seamy allure of Los Angeles in this vivid social history, focusing on the murder trial of Dave Clark, a dashing, charismatic L.A. prosecutor whose fall from grace serves as a neat metaphor for the city: glamour and promise concealing an endemic corruption that, paradoxically, enhances the glamour. Clark was a crack prosecutor; in his early 30s, he had several high-profile victories to his credit and appeared to be bound for great things. Instead, he was sucked into the vortex of “ ‘The System,’ a low-profile but all-powerful syndicate that ran the gambling, prostitution, and bootlegging rackets in L.A.” His mysterious involvement in the murders of Charlie Crawford, L.A.’s underworld boss, and reporter Herbert Spencer led to a sensational trial that captivated the public with its dynamic cast of characters, secret agendas and shocking violence—it was just like a movie. The author’s account of the trial is engrossing, as is his handling of the supporting characters, including Leslie White, a pioneering scientific investigator who leveraged his experiences into a successful career as a pulp-fiction; Clara Bow, the rapidly imploding movie sex goddess; E.L. Doheny, scandal-ridden oil baron; and unhappy oil executive–turned-author Raymond Chandler. Rayner also provides useful glosses on the Teapot Dome scandal, the catastrophic Julian Petroleum Ponzi scam and the horrific flood caused by the failing of the St. Francis Dam. However, despite some striking descriptive passages, the author fails to create a coherent picture of Los Angeles in the ’20s and ’30s. Rayner’s fascination with Clark dominates, and scant attention is paid to the lives of ordinary citizens trying to function within a fatally compromised system. Nonetheless, the narrative of crooked cops, larcenous lawyers and perverted politics is compelling.

The material would have benefited from a wider focus, but Rayner delivers a lurid, low-down portrait of Los Angeles sure to appeal to readers interested in the real L.A. confidential.

THE ELEPHANT
by Richard Rayner

ANATOMY OF A HUSTLE
by Clinton Galloway
Nonfiction

THE LAST TESTAMENT OF BILL BONANNO
by Bill Bonanno
Nonfiction