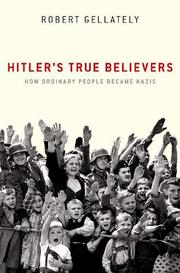 It’s tempting to draw parallels between the Hitler era and the present age of ascendant nationalism, and Gellately (History/Florida State Univ.; The Oxford Illustrated History of the Third Reich, 2018, etc.) offers reasons to do so.

Which Germans turned out to be Nazis between 1920 and 1945? By the author’s account, just about all of them, eventually, despite protestations of ignorance by many postwar Germans. In fact, as he writes, 57% of Germans answered yes when asked in 1948, “Do you consider National Socialism to be a good idea that was poorly implemented?” Hitler, Gellately reminds us, assumed power with the narrowest of margins, supported by people already in power whose aim was to rid Germany of democracy. He also notes that in the January 1933 election, “no less than 71.6 percent of the vote went to parties with ‘socialist’ or ‘communist’ in their titles,” making it incumbent on the Nazis to deliver on the “socialist” in the party name while remaining right-wing in orientation. They did so by offering a big tent for “the broadest possible constituency,” building on three tenets: nationalism, anti-Semitism, and socialism of a particularly German variety that was of and for “racially fit” citizens. Protestants responded favorably, Catholics less so; rural people favored the Nazis, city people the left. Although Hitler talked a good game about abolishing the stock market and reining in business, in the end, he capitulated to the capitalists, mostly abandoning the socialist premise. “No single factor,” writes Gellately, “can account for why ordinary people began opting for the National Socialist Party, though any who did at the very least knew in broad terms what it stood for.” The author ventures that economic insecurity and fear of the other were powerful motives—and that Hitler drew heavily on them in transforming a civil society into a dictatorship with astonishing speed.

A thoughtful, timely study of how Nazism moved from the political fringe to the heart of German life.