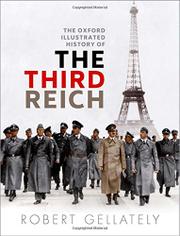 THE OXFORD ILLUSTRATED HISTORY OF THE THIRD REICH

A richly illustrated and textually dense assessment of the Hitler regime.

The Nazi movement did not arise in a vacuum. As historian Matthew Stibbe notes in this collection edited by Gellately (History/Florida State Univ.; Lenin, Stalin, and Hitler: The Age of Social Catastrophe, 2007, etc.), the Hitler movement was bolstered by a sharp rightward turn of the leading conservative party in Weimar Germany, led by a media mogul who, like the Nazis, opposed the liberal government and decried the putative “political disorder, sexual chaos, and economic turmoil” that marked the Depression era. One little-known plank of the Nazi platform was a program of “plebiscitary dictatorship,” buttressed by referendums that gave the illusion of democracy even when there was only one choice on the ballot. There was even a vote for the Anschluss, or annexation of Austria: “Party members used cars to ferry the old and the frail to the polling stations,” as German historians Hedwig Richter and Ralph Jessen note, while “special polling stations were set up in hospitals.” These elections were useful, Gellately argues, because they enabled the regime to proclaim to the world that the entire nation was with it, thereby allowing it to advance a social agenda that, infamously, demanded that Jews and foreigners be eliminated so that the German “community of the people” would prevail—and, of course, build a nation and even an empire. There are small surprises scattered throughout the text: for instance, the note that the Nazi regime spent record sums on the arts, while, even though it was classified as a “degenerate” form of culture, jazz played on German radios until the end of 1943, “with the implementation of the stricter total war measures.” Indeed, we have so much documentation of the regime’s terror because the Nazis were proud of it, even in that time of collapse.

Essential for students of modern history, marked by fresh scholarship and little-seen photographs.

THE NUREMBERG INTERVIEWS
by Leon Goldensohn