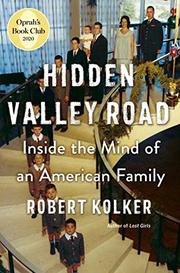 Inside the Mind of an American Family
by Robert Kolker
BUY NOW FROM
AMAZON
BARNES & NOBLE
LOCAL BOOKSELLER
GET WEEKLY BOOK RECOMMENDATIONS:

One family’s history reveals the mystery of schizophrenia.

In a riveting and disquieting narrative, Kolker (Lost Girls: An Unsolved American Mystery, 2013) interweaves a biography of the Galvin family with a chronicle of medicine’s treatment of, and research into, schizophrenia. Don and Mimi Galvin had 12 children—10 boys and two girls—born between 1945 and 1965. Religious beliefs—both parents were Catholic—were not the only reason for their fecundity. Mimi seemed to crave the distinction of “being known as a mother who could easily accomplish such a thing.” In addition, Kolker speculates, the children may have assuaged an abiding feeling of abandonment, including by a husband more focused on his career than his family. Mimi was a perfectionist who controlled every aspect of the children’s lives: chores, enriching after-school activities, and feelings, which she believed should best be repressed. Insisting that they were raising a model family, the Galvins refused to acknowledge problems, such as violent fights among the older brothers, which the parents dismissed as merely roughhousing. The other brothers felt lost, ignored, “less than safe, treated like a number and not a person.” The eldest, Donald, was the first to exhibit signs of schizophrenia, with bizarre behavior that repeatedly landed him in mental hospitals; soon, five brothers followed, all with the same diagnosis, manifested somewhat differently, including sibling sexual abuse. Meanwhile, Mimi pretended everything was normal—until she could not hide the family’s suffering. With each diagnosis, “she became more of a prisoner—confined by secrets, paralyzed by the power that the stigma of mental illness held over her.” Kolker deftly follows the psychiatric, chemical, and biological theories proposed to explain schizophrenia and the various treatments foisted upon the brothers. Most poignantly, he portrays the impact on the unafflicted children of the brothers’ illness, an oppressive emotional atmosphere, and the family’s festering secrets. By the 1980s, the Galvins became subjects of researchers investigating a genetic basis for the illness; those extensive medical records inform this compelling tale.

A family portrait of astounding depth and empathy.