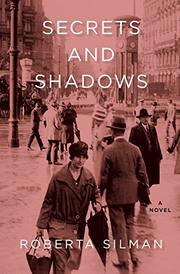 The past is never really past in Silman’s (Boundaries, 2015, etc.) latest novel, in which a man thinks back to his childhood in World War II–era Berlin.

It’s 1989, and the Berlin Wall has just come down. This awakens traumatic memories in Paul Bertram (ne Berger), who was a Jewish child in Berlin and escaped with his family to Sweden and then to America. He asks his ex-wife, Eve, to accompany him back to the German capital. They’d been married for 23 years and had three kids before Paul became distant and unfaithful. Paul has always been immensely talented, charming, and successful; everybody loved him—except Paul. Now he hopes for some sort of expiation in Germany, and surprisingly, Eve agrees to go with him. The Jewish Berger family had lived in Berlin for generations; they were successful and respected jewelers. In the 1930s, they thought that Adolf Hitler’s evil regime would pass. Later, their protector was Paul’s grandfather Gunther Berger’s chief designer, a gentile named Hjalmar Friedmann. The Friedmann family moves into the Bergers’ large house to disguise the Jewish family’s presence there. It gradually becomes, in effect, the Friedmanns’ house, as the Bergers have to hide in the attic. After Hjalmar dies in 1944, the Bergers make another long, dangerous trek. In this work, Silman shows herself to be an accomplished and experienced writer. The novel’s pacing is almost excruciatingly slow, but that’s what this study demands, as it allows the author to dig deeply into Paul’s pain and his relationship with Eve. Similarly, the elder Paul seems almost too good to be true, but that, too, is necessary so that readers can understand his suffering—his later success didn’t heal his wounds as he’d hoped it would. Over the course of the story, Paul comes to terms with his heritage, the awful things that he has done, and what has been done to him.

A harrowing story that readers will find compelling to the very end.

THE HOLOCAUST
by Laurence Rees
Nonfiction