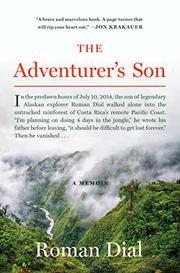 A brisk account of a father’s search for his 27-year-old son, who vanished on a solo trek through Costa Rica’s Corcovado jungle.

Alaskan adventurer and ecologist Dial (Mathematics and Biology/Alaska Pacific Univ.; Packrafting! An Introduction and How-To Guide, 2008) chronicles his quest to figure out what happened to his son, Cody. Fusing personal history with elegy and adventure, this arresting narrative of every parent's worst fear begins with the author’s background and then recounts the Dial family’s many exciting excursions. Meticulous memories of father and son exploring places like Alaska and Borneo establish Cody as a person who grew into a capable adventurer and biologist. In the second section, the author pieces together Cody’s volcano climbs and resourceful forays in Central America before contact with his parents ceased. His last email was written in Costa Rica in 2014, and its haunting last line—“…it should be difficult to get lost forever”—reverberates throughout the text. When he realized that his son may have disappeared, Dial left for Costa Rica to unearth the truth. With the assistance of his friends, wife, and an intriguing mixture of officials and locals (who weren’t always forthcoming with information), Dial confronted rumors of foul play and continued to sift through his own knowledge of his son’s character for clues. The author’s guilt at having sparked Cody’s interest in the wild mingles with the veteran adventurer’s tactical calm in the face of numerous obstacles. His descriptions of Costa Rica's jungles echo with mystery, and, despite his grief, Dial’s writing remains measured and cleareyed. When he recounts how a TV crew took a sensational angle for the sake of drama, the author’s dismay is palpable. Two years later, Cody’s remains were found, and it was determined that his death was an accident, which brought his family some sense of closure. In its emotional restraint and careful descriptions of the wild, this is a slow-burning tribute.

A poignant, highly moving memoir of tragic circumstances and a lifelong love of exploring.

THE CITY WE BECAME
by N.K. Jemisin
Fiction

ALL THE WRONG PLACES
by Philip Connors
Nonfiction

THE YEAR OF MAGICAL THINKING
by Joan Didion
Nonfiction