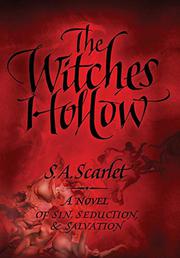 A man wrestles with his past while attempting to free a village of an evil entity in this debut paranormal thriller.

Scarlet’s novel focuses on Arthur Montesque, a downtrodden alcoholic and former professional investigator who’s seen happier days. However, one fateful day, he receives a mysterious letter requesting his assistance on a life-changing assignment. The sender, an antiques collector named L.A. Calesanti, wants Montesque to conduct business on his behalf in the small, heavily forested hamlet of Lost Hollow, which, he writes, will feel like “stepping through a portal to the past.” With lucrative compensation provided in advance, Montesque jumps at the opportunity and soon arrives at a forest’s edge after days of traveling on foot and horseback; meanwhile, back at home, his abode mysteriously bursts into flames and burns to the ground. Montesque finally arrives in the town, which features ominous caves, black “Shadowspire” mountains, and superstitious citizens who are terrified of the path into the woods that borders their home. The strange new surroundings seem to play with the investigator’s sense of reality, but they’re also where he discovers that he has hidden powers of his own. In the town, he meets a local barmaid named Vanessa, whom he instantly lusts after, and Scarlet’s heavily detailed descriptions of Montesque’s sexual dalliances (with Vanessa and others) add zest and spice to the novel. In a series of cryptic letters, Montesque is charged with looking into the disappearance of Calesanti’s assistant, who went missing after attempting to locate and purchase an ancient relic.

While in the tiny hamlet, Montesque also wants to investigate a vicious forest “beast” called the Morrowen, which he saw during his ride into Lost Hollow. As he and Vanessa become closer, she explains to him that the town is powered by magic, which she calls the “one thing that science will never be able to explain”—and which made the path that he followed into the town suddenly disappear. Banding together with Briar, a local huntsman, they set out to conquer the terrible evil that lives in the woods. However, Scarlet proves to be a highly imaginative author and has much more in store for readers of this serpentine tale of sorcery and wizardry. In one memorable scene, for example, demons reveal a “spectral lens” conduit that they use for transportation, as crackles of black energy snap across Montesque’s vision. Slowly but surely, the protagonist draws closer to solving the mystery of the missing assistant while also fiercely battling creatures lurking in the forest’s shadows—including an enemy that no one saw coming. The author fills this novel’s energetic plot with unexpected twists, and it’s clearly written with seasoned horror-fantasy fans in mind. Scarlet is also quite adept at characterization and ably conjures occult elements as part of the overall worldbuilding. One notable scene involving demons battling a surprisingly powerful Montesque in a dream realm and another involving Calesanti and his daughter are rendered in an especially vivid manner.