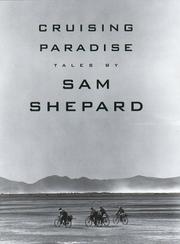  Playwright and actor Shepard's (Motel Chronicles, 1983, etc.) first fiction explores many of the same themes as his best plays: the relations of fathers and sons, the transition to manhood, the lure of the open road, the endless skies out west, loneliness, and the silences that punctuate everyday life. In 40 short tales, Shepard relies on a sun-puckered, angular style that suits his western landscapes. His narrators dream of epic movie scenes but are trapped in the brittle world of troubled adults. In ``A Man's Man,'' for example, a boy spends a day bucking hay with a tough-guy friend of his father's who ends their labors with an unexpected fondle. The 1950s friends of the boy's parents whirl about in a cycle of liquor, lust, jealousy, and violent outbursts. In pieces that are sometimes impressionistic, and occasionally clearly autobiographical, Shepard recalls meeting Duke Ellington while working as a busboy, crazy speed-freak nights spent as a barge guard on New York's East River, and messing up a job running a backhoe while thinking of a woman. Many stories feature men gone sour over women who've just gone; in these tales, the women grow tired of their lovers' lies, and drinking, and loss of control. Terse dialogues (a defense of cruising the Badlands by car, a justification for the fear of flying) suggest the weight of all the things these characters cannot say. A dozen of the pieces are presented as the dead-on notes of an actor making a film in Mexico (the film sounds remarkably like Voyager, a 1990 feature in which Shepard starred). The actor describes driving to the location in Mexico, his conflicted feelings about the relative luxury in which the film crew lives, getting drunk with a stuntman, and watching NFL football in a local bar. These pieces perfectly capture the real anarchy and tedium of moviemaking. Even if he weren't a major playwright, Shepard would merit attention for this powerful prose fiction.

SPY OF THE FIRST PERSON
by Sam Shepard
Fiction

THE ONE INSIDE
by Sam Shepard
Nonfiction

DAY OUT OF DAYS
by Sam Shepard
Fiction