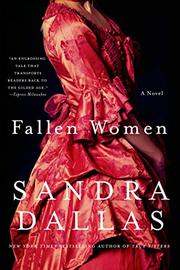 Beret Osmundsen is upset when she receives news of her sister’s death and discovers she was murdered during a brutal attack in a high-class brothel. Beret raised her much younger sibling following their parents’ deaths, but a bitter argument led to their estrangement. Lillie moved in with their socially prominent aunt and uncle, Varina and John Stanton, in Colorado, and Beret assumed that she’d been residing in their home since she left New York. Determined to discover the circumstances of Lillie’s murder, Beret travels to Denver and teams with Detective Michael McCauley, who’s in charge of the investigation. Although sparks don’t immediately fly, the detective and Beret develop a mutual respect for each other as they question those who were part of Lillie’s circle during her final days: McCauley quickly learns that Beret has the mettle to stand up to almost anyone, and Beret discovers McCauley is a man of principle. She also slowly realizes that she never really knew her sister at all. Pretty certain Lillie’s murder was not a random act (although a second murder points in that direction), the unlikely pair pursues leads in Denver’s seediest businesses in the tenderloin district, where the least desirable prostitutes occupy cribs, men make wagers in gambling joints, and opium dens provide mind-numbing retreat; but they also pursue suspects who rank among the city’s highest social strata and occupy mansions in the best part of town. Sorting through numerous suspects—and veteran Dallas deftly offers a wide array of shady characters to choose from—Beret has a tough time eliminating anyone as she searches for a pair of diamond earrings, which she believes were stolen from her sister by the murderer.

A lightweight, innocuous narrative. For many readers, the resolution (when it finally comes) will be no great shock. Still, not a bad choice for a lazy, low-key weekend.

A QUILT FOR CHRISTMAS
by Sandra Dallas
Fiction

PRAYERS FOR SALE
by Sandra Dallas

THE DIARY OF MATTIE SPENSER
by Sandra Dallas
Fiction