The Kirkus Prize: Spotlight on the Fiction Finalists 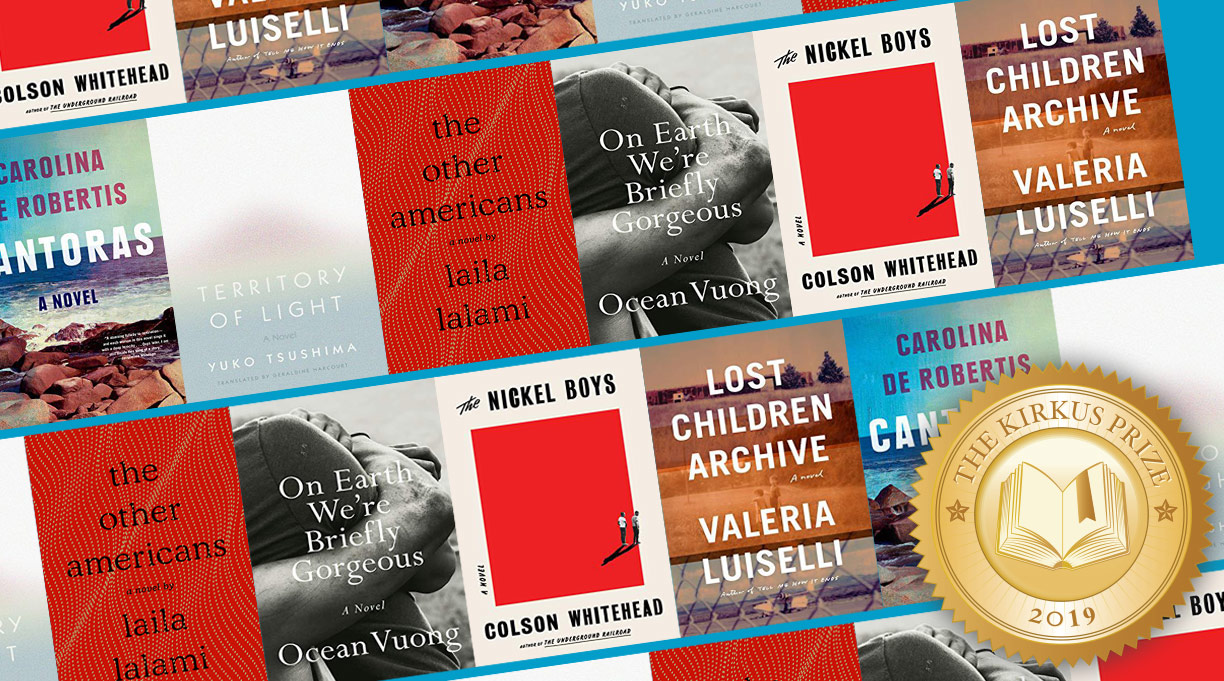 I’m thrilled to introduce the six finalists for the 2019 Kirkus Prize in Fiction. Our dedicated judges—Michelle Malzono, a buyer at Changing Hands Bookstore in Arizona, and Kirkus reviewer and author David L. Ulin—have chosen an exciting and diverse group of finalists. Author Min Jin Lee (Pachinko) will be joining them to determine the winner on Oct. 24.

Cantoras by Carolina De Robertis (Alfred A. Knopf) tells the story of five queer women in Uruguay beginning in 1977, when they create a world for themselves in the face of a violent military dictatorship that’s raping, jailing, and disappearing gay people. “Calling themselves cantoras, or women who sing, [the friends] take a weeklong trip to Cabo Polonio, a sleepy, secluded coastal village, where they find a haven among horrors. On the beach, the women laugh late into the night, make love unabashedly, and share secrets over whiskey and yerba maté.” The novel, which follows the women for more than 30 years, is an immersive reading experience; as our review says: “Rich and luscious, De Robertis’ writing feels like a living thing.”

The Other Americans by Laila Lalami (Pantheon) is a murder mystery and a family story told in a “structurally elegant” way, according to our review. The dead man is Driss Guerraoui, a Moroccan immigrant and restaurant owner, who was killed by a hit-and-run driver after closing up one night. The chapters circle among the perspectives of Driss’ daughter, a jazz composer; the local police detective; the man who owned the bowling alley next door; an undocumented laborer who witnessed the accident; and several others. Our review says that “Lalami is in thrilling command of her narrative gifts….Nuanced characters drive this novel, and each voice gets its variation.”

Lost Children Archive by Valeria Luiselli (Alfred A. Knopf) is “a powerful border story, at once intellectual and heartfelt,” according to our review. “An unnamed New York couple, both audio documentarians, [are driving with] their children, ages 10 and 5, to the Arizona-Mexico border. The father wants to explore the remnants of Apache culture there; the mother, who narrates much of the book, is recording an audio essay on the border crisis….Luiselli thunderously, persuasively insists that reckoning with the border will make deep demands of both our intellectual and emotional reserves.”

Territory of Light by Yuko Tsushima, translated by Geraldine Harcourt (Farrar, Straus and Giroux), recounts a year in one young woman’s life after she splits up with her husband. “Tsushima’s prose is achingly elegant, well worth lingering over,” according to our review. “But there’s also a quiet simplicity, even banality, to her style and what she allows us to see of her narrator’s life: domestic rituals like waking up, washing, shopping for groceries, cooking, and all the rest. Grace hovers above the banal and the transcendent alike.”

On Earth We’re Briefly Gorgeous by Ocean Vuong (Penguin Press) is “a raw and incandescently written foray into fiction by one of our most gifted poets,” according to our review. A young Vietnamese immigrant “writes a letter to his illiterate mother in an attempt to make sense of his traumatic beginnings….The result is an uncategorizable hybrid of what reads like memoir, bildungsroman, and book-length poem. More important than labels, though, is the novel’s earnest and open-hearted belief in the necessity of stories and language for our survival.”

The Nickel Boys by Colson Whitehead (Doubleday) tells the story of Elwood Curtis, “a law-abiding, teenage paragon of rectitude, an avid reader of encyclopedias and after-school worker diligently overcoming hardships that come from being abandoned by his parents and growing up black and poor in segregated Tallahassee, Florida.” None of that saves him from being unjustly arrested and sent to the infamous Nickel Academy, “a monstrously racist institution whose students, white and black alike, are brutally beaten [and] sexually abused.” Inspired by a real-life Florida reform school, Whitehead’s latest “displays its author’s facility with violent imagery and his skill at weaving narrative strands into an ingenious if disquieting whole,” according to our review.