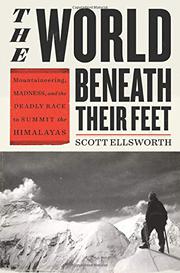 THE WORLD BENEATH THEIR FEET

The dramatic saga of the race between nations to climb the planet’s highest mountains.

In his latest, Ellsworth (African American History, Southern Literature/Univ. of Michigan; The Secret Game: A Basketball Story in Black and White, 2015, etc.) focuses on the 1930s and the men and women who risked their lives to climb the “deadliest mountains on Earth.” In vivid, novelistic prose, the author describes the significant expeditions and delivers engaging portraits of climbers from many different countries and their invaluable Sherpas. In 1931, the Germans stunned the British and their famous Alpine Club when an expedition led by former soldier Paul Bauer reached the summit of Kangchenjunga, thought to be the world’s second-highest mountain. For Bauer, Ellsworth writes, the success was “a way to reclaim the honor of Germany, the honor that had not been lost in the trenches but in the treachery of the Treaty of Versailles.” The British responded with a 1933 expedition to Everest. Equipped with newly designed boots, suits, and a new type of glacier glasses, Frank Smythe and Eric Shipton were hopeful but still failed. The Americans, with their Explorer’s Club, entered the race when Terris Moore and Dick Burdsall reached the summit of Minya Konka. In 1934, a German team failed to climb Nanga Parbat; four Germans and six Sherpas died. Inspired by James Hilton’s 1933 novel, Lost Horizon, the British were the first to reach their Shangri-La, Nanda Devi’s pristine, massive, circular amphitheater, the Sanctuary. Maurice Wilson, who fought on the Western Front during World War I, flew from England to India and then crossed the Tibetan border to take on Mount Everest. He perished. In 1937, a German team took on Nanga Parbat a second time without success. In 1950, a French team led by Resistance fighter and mountaineer Maurice Herzog climbed Annapurna. Finally, as Ellsworth recounts triumphantly, on May 29, 1953, New Zealander Edmund Hillary and his Sherpa, Tenzing Norgay, shook hands on Everest’s summit.