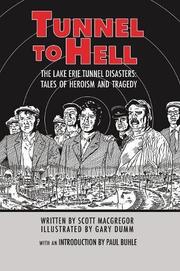 In 1916 Cleveland, a risky tunnel construction project brings together a black inventor and laborers in this debut graphic novel.

Inventor Benjamin Beltran has just developed a helmet that allows people to breathe while surrounded by smoke, but no one will buy his product or let him run ads for it—because he’s black. Worse, the press won’t even cover his invention because, one journalist tells him, “our readers will never accept a negro as the ‘hero’ of a story.” Meanwhile, public outrage builds as a young boy contracts typhoid from the contaminated water piped in from Lake Erie. The mayor urges his waterworks chief to hasten the progress on the tunnel being dug under the lake in search of purer water. The laborers—Irish, German, and more—are given a few extra dollars to dig when the tunnels are filled with dangerous, combustible methane. One of these workers is Rodger Clarke, an Irishman who remembers clearly an incident 10 years ago when a crib, a construction structure in the lake, went up in flames, killing many of his friends in the tunnel and somehow sparing him. Then, one July night, history repeats itself: Clarke is in the tunnel when a deposit of methane is suddenly released, suffocating men and setting the crib aflame—and only Beltran, with his new invention, stands a chance of saving them. In a preface, MacGregor positions his timely historical novel about contaminated water as an ode to the common man and a meditation on the injustices of history (and an attempt to correct the record). Largely, he succeeds, with vivid characters; an engrossing, well-paced narrative; and a knack for evoking the racism and classism of the time. Dumm’s (co-illustrator: Masterful Marks: Cartoonists Who Changed the World, 2014) art tends toward the grotesque—the characters are all bulging eyes and thick lines, and it’s often difficult to tell who exactly is speaking because many of the players look similar. But scenes and landscapes are deftly rendered.” One of the narrative’s highlights is the earthy banter between the laborers that leavens the weighty topics in the book: When an unpopular character is pulled from the tunnel alive, there are boos and shouts of “throw ’im back!”

HOW TO SURVIVE IN THE NORTH
by Luke Healy
Children