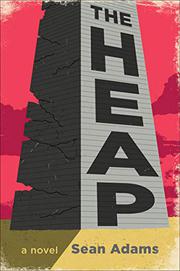 When the largest and most audacious housing project in history crashes to the ground, a new culture is born, for good or bad.

Adams’ debut novel is a dystopian nightmare that is metaphorical in nature but has a compelling story, a recognizable villain, and a few key characters whose personality traits make them interesting. The setting is Los Verticalés, a nearly 500-story architectural marvel of its time; or, to be more accurate, what’s left of it after the unprecedented housing complex crashed to the ground under its own weight. What the salvage crew unaffectionately calls “the Heap” is nothing but an enormous pile of rubble punctuated by the occasional dead guy. Weirdly, there’s a single survivor: DJ Bernard Anders, who mysteriously still has electricity and broadcasts regularly to a wide audience from somewhere in the rubble. Meanwhile, interstitial excerpts from a history of "the Vert" titled The Later Years give context to the monolith’s rise and fall. The novel’s story centers on the “Dig Hands,” the poor souls recruited to shovel their way through the biggest recycling project in the world. The link to Bernard is his brother, Orville, digging relentlessly and carrying on nightly conversations with his brother over the radio. Orville’s companions include Hans, the photographer who emotionally captures his subject, and Lydia, who is trying to work her way up the community’s political structure. There are a couple of bad guys here—Hal Cornish, from the company that runs the radio station, wants Orville to converse with his trapped brother for the highest ratings, at any cost, while Peter Thisbee, the mogul who built the Vert in the first place, plays at redemption while working his own machinations to profit off his fallen monolith. It’s distressing that we have so many bleak visions of the future these days but at least here people are given a chance to dig themselves out of the hole that the upper class made.

A vision of the future that gives the working class a chance to get even.