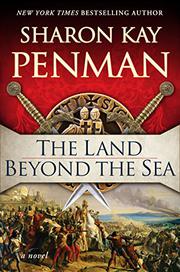 THE LAND BEYOND THE SEA

This mammoth historical novel dives deep into the undersung saga of the leper king of Jerusalem and his archfoe, Saracen sultan Saladin.

It’s the 1170s, and a small enclave of Frankish colonists known as Poulains are trying to hold on to their feudal fiefdoms in and around the city of Jerusalem, footholds gained during the Crusades in the land they call Outremer—beyond the sea. The main focuses of this multivariegated work, encompassing enough material for a trilogy, are the ruling families of the European Christian interlopers and their Muslim Saracen counterparts. Most attention is paid to Baldwin IV, who becomes king at 13 when his father, Amalric, unexpectedly dies. From an early age, Baldwin exhibits attributes of greatness, including charisma, wit, courage, and excellent horsemanship. His imperviousness to pain is the first symptom of what will soon be diagnosed as leprosy. Baldwin’s strong support system, including his ambitious, embittered mother, Agnes (whom Amalric divorced upon becoming king); his spiritual adviser, William, archdeacon of Tyre; and his staunchest friend, Balian of Iberlin, enables him to overcome or at least manage the depredations of the disease and spearhead the Franks’ ongoing struggles—diplomatic and otherwise—with Saladin. Penman (A King's Ransom, 2014, etc.) excels at depicting medieval warfare and the unintended, often disastrous consequences of the best-laid strategies. She is equally adept at depicting the rivalries and internecine strife that roil Baldwin’s court—peopled by characters who are mostly related to each other by some degree of kinship—finding credible motives for everyone’s grudges. Occasional cutaways to Saladin and his entourage are less detailed but also humanize him, his extended family, and allies. Dramatic set pieces—a wedding in a castle under attack, a future Knight Templar dragged out of a brothel—abound. The religious and tribal conflicts, among both the Christians and Muslims—Kurds, Shiites, and a murderous sect aptly dubbed the Assassins—certainly have echoes for today. This book amply illustrates the extent to which fortune and personality dictated victory, détente, and defeat on both sides.

A teeming 12th-century tapestry which Penman renders coherent, even eloquent.

DEFENDING THE CITY OF GOD
by Sharan Newman
Fiction