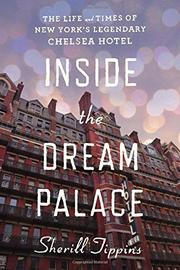 INSIDE THE DREAM PALACE

A revealing biography of the fabled Manhattan hotel, in which generations of artists and writers found a haven.

Turn-of-the century New York did not lack either hotels or apartment buildings, writes Tippins (February House: The Story of W. H. Auden, Carson McCullers, Jane and Paul Bowles, Benjamin Britten, and Gypsy Rose Lee, Under One Roof In Wartime America, 2005). But the Chelsea Hotel, from its very inception, was different. Architect Philip Hubert intended the elegantly designed Chelsea Association Building to reflect the utopian ideals of Charles Fourier, offering every amenity conducive to cooperative living: public spaces and gardens, a dining room, artists’ studios, and 80 apartments suitable for an economically diverse population of single workers, young couples, small families and wealthy residents who otherwise might choose to live in a private brownstone. Hubert especially wanted to attract creative types and made sure the building’s walls were extra thick so that each apartment was quiet enough for concentration. William Dean Howells, Edgar Lee Masters and artist John Sloan were early residents. Their friends (Mark Twain, for one) greeted one another in eight-foot-wide hallways intended for conversations. In its early years, the Chelsea quickly became legendary. By the 1930s, though, financial straits resulted in a “down-at-heel, bohemian atmosphere.” Later, with hard-drinking residents like Dylan Thomas and Brendan Behan, the ambience could be raucous. Arthur Miller scorned his free-wheeling, drug-taking, boozy neighbors, admitting, though, that the “great advantage” to living there “was that no one gave a damn what anyone else chose to do sexually.” No one passed judgment on creativity, either. But the art was not what made the Chelsea famous; its residents did. Allen Ginsberg, Bob Dylan, Andy Warhol, Janis Joplin, Leonard Cohen, Robert Mapplethorpe, Phil Ochs and Sid Vicious are only a few of the figures populating this entertaining book.

A zesty, energetic history, not only of a building, but of more than a century of American culture.