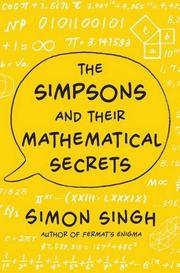 THE SIMPSONS AND THEIR MATHEMATICAL SECRETS

Higher math for dummies, courtesy of The Simpsons.

Perhaps Simpsons nerds have known this all along, but for the rest of us who think of the TV show as primarily a sharp piece of comic writing, it may come as a surprise to learn that it is riddled with sophisticated mathematics, including rubber sheet geometry, the puzzle of Rubik’s Cube, Fermat’s last theorem (“embedded within a narrative that explores the complexities of higher-dimensional geometry”), Mersenne prime numbers and plenty of other obscure material. Often in the show, this will fly by as sight gags, but just as often it is faced head-on, as when Lisa tackles statistics or Homer ponders three dimensions. Singh (Big Bang: The Origin of the Universe, 2005, etc.) is a lively writer with an easy, unthreatening manner who takes readers smoothly through some fairly thorny mathematics. He also dives into the curious relationship between mathematics and comedy writers: It appears that most Simpsons writers graduated from Harvard with a degree in mathematics, and nearly all were on the staff of the Lampoon. Singh finds them possessed of a desire “to drip-feed morsels of mathematics into the subconscious minds of viewers.” One of the show’s writers put it simply: “The process of proving something has some similarity with the process of comedy writing, inasmuch as there’s no guarantee you’re going to get to your ending.” The author includes plenty of solid, vest-pocket profiles of both the show’s writers and great mathematicians of the past—e.g., Zu Chongzhi, Sophie Germain, Leonhard Euler—as well as a look at Matt Groening’s Simpsons spawn, Futurama, a show about a futuristic delivery service with enough nerdy references to sink a spaceship.

A fun trip with the “ultimate TV vehicle for pop culture mathematics.”