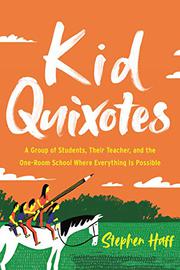 A Group of Students, Their Teacher, and the One-Room School Where Everything Is Possible
by Stephen Haff
BUY NOW FROM
AMAZON
BARNES & NOBLE
LOCAL BOOKSELLER
GET WEEKLY BOOK RECOMMENDATIONS:

The story of an after-school program that helps immigrant children adjust to their new American life.

What does reading and translating Don Quixote, published in the early 17th century, have to do with modern-day life for immigrant children in Bushwick, Brooklyn? Quite a lot, according to Haff, a theater director and former high school English teacher, who set up Still Waters in a Storm for children of undocumented immigrants. As he writes, the author chose Cervantes’ work because “that book is everything human—it is funny and tragic and beautiful and disgusting and smart and stupid—and because it was written in Spanish, the native language of my students and their families.” By reading the quirky tale of a man who never gave up his dreams, Haff’s students have found new meaning in their own lives despite the constant fear of deportation amid the current toxic landscape surrounding immigration, an atmosphere inflamed by the current presidential administration. Not only did the students read the book and translate it out loud; they also adapted it into a series of musicals that they wrote. They became Kid Quixotes, acting out their own versions of the story, which they performed in multiple venues. Haff also includes his own story of being an educator suffering from bipolar depression and how this project has positively impacted his life as well. This is a decidedly upbeat book full of compassion and an attentiveness to language, and Haff imparts pertinent lessons regarding truth, hope, thoughtfulness, awareness, friendships, and what it means to be genuine. The narrative also carries the weight of what each child must endure as an immigrant, including racism, distrust, and fear, and shows how they have worked to overcome these obstacles via songs, acting, drawings, and imaginative retellings of their lives.