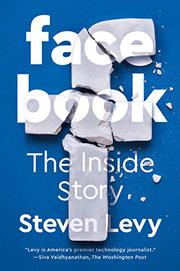 Wired editor at large and longtime tech reporter Levy (In the Plex: How Google Thinks, Works, and Shapes Our Lives, 2011, etc.) explores the inner workings of the social media giant.

While attending Harvard, Facebook founder Mark Zuckerberg “took a laissez-faire attitude toward classes” while deep within projects such as Course Match, which allowed students to see who was signed up for which classes—good for those seeking candidates for a winning study group, one might say, but also a fine tool for a stalker. Levy explores the morally neutral world that Zuckerberg built with Facebook, an enterprise whose every technological feature disguises means to gather salable data on the user’s movements, preferences, political leanings, and the like. Those features, of course, have put Facebook very much in the news as a vehicle for delivering “fake news.” As one advertising executive noted, looking at the growth of “ruble-denominated accounts” surrounding the 2016 presidential election, “it was one hundred percent knowable that [the Russians] would use social media in this way.” Defending himself in the wake of the massive data mining undertaken by companies such as Cambridge Analytica, Zuckerberg has retreated behind the shield of free expression, though belatedly acknowledging that consumers might not want their private data to be so easily accessed. “For the past twelve years,” writes Levy of the choice between more or less privacy, “Zuckerberg had been ranking those values incorrectly.” For all his criticisms, the author, who enjoyed free access to Zuckerberg, is less dismissive of Facebook and its intentions than Roger McNamee, whose book Zucked (2019) condemns the company’s demonstrated disregard for its users’ rights. If changes for the better come, they’ll likely be grudging. Levy makes it clear that Zuckerberg believes in the essential benefit to the world of his mission even if he is “the man who some think has done as much destruction to that world as anyone in the business realm.”

Of considerable interest to followers of technological trends, futurists, and investors.

IN THE PLEX
by Steven Levy
Nonfiction