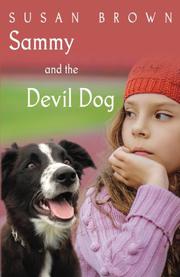 SAMMY AND THE DEVIL DOG

A grade schooler’s determination to tame a fearful, aggressive pup with love brings both trouble and unexpected change in this children’s novel.

Everything has gone wrong for Samantha “Sammy” Connor since the death of her beloved grandfather Papa Jack. She and her single mom had to move after he died; money is short; and Sammy is messing up at her elementary school. The girl also feels distanced from her mom, an artist who spends a lot of time in her ceramics studio. When Sammy sees chained-up pup Jack being cruelly mistreated by school bully Brian Haydon’s teenage brothers, she persuades her classmate to sell Jack to her, earning the money by reading to an elderly woman at the local seniors’ home. Sammy soon wonders, though, if kindness will be enough to change the barking, lunging, destructive “devil dog” into a loving pet. She comes to see a parallel in Brian’s anger when she witnesses him being denigrated and physically abused by his bad news brothers—and comes up with a plan to rescue him too. But “why was it that when she tried so hard, things kept going wrong?” Jack chews things up, won’t listen, and nips at people. Brian comes to school with bruises and keeps shoving kids and mouthing off to teachers. Then a shockingly violent incident occurs, bringing eventful consequences for Jack, renewed closeness between Sammy and her mom, and the girl’s sad realization that she can’t be Brian’s rescuer. As her mom says, “people have to fix themselves.” In this novel, Brown (Not Yet Summer, 2017, etc.), a prolific author of books for ages 9 and up, offers an affecting portrait of a young girl struggling to recover a sense of stability after a profound loss. Sammy’s ups and downs with her mom, who is caring but self-absorbed with professional and money concerns, ring true. And principal Jeanne Martinez and counselor Mrs. Sovich are sympathetic adults. The story also presents a powerful lesson about the effects of bullying. The ethnicity and race of the characters are not stated, although the book cover shows a young white girl and there is a mention of Sammy’s best friend’s Japanese grandparents.

A relatable female protagonist and a meaningful message about the relationship between hurt and anger.